Does technology make us autistic? 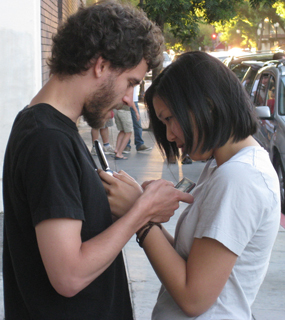 As the brain science of social connection becomes more widely appreciated, our communications tools will be judged increasingly with this yardstick. Attention deficit disorder is conventionally described as the classic ailment of our multitasking age, but when you look at most electronic communication through the lens of neuroscience, it’s hard not to think that autism might be a more appropriate “poster condition” for the digital society. (The cultural critic Harvey Blume made this argument nearly a decade ago.) When we interact with other humans via communication channels that are stripped of facial expressions and gestures and laughter, we are unwittingly simulating the blank emotional radar of the mindblind.

The lesson here is twofold. First, certain social settings— particularly those that involve virtual communication— may artificially dampen laughter that would otherwise be generated in a face-to-face encounter. Second, social interaction without laughter produces modified brain chemistry, which affects both your background impression of the exchange— its emotional color— and the resulting trace memories the exchange leaves in your head. Putting smiley faces into email to supplement the lack of verbal intonation helps convey when you’re trying to be funny, but because the recipient of your message is still alone when reading it, she won’t be likely to laugh out loud, and that suppressed laughter will make a difference. The memory will be happier— and consequently stronger— if she laughs.

This may sound like an extreme comparison, but it might not be as much a reach as you think: