Can you tell the state of the economy by how women dress? 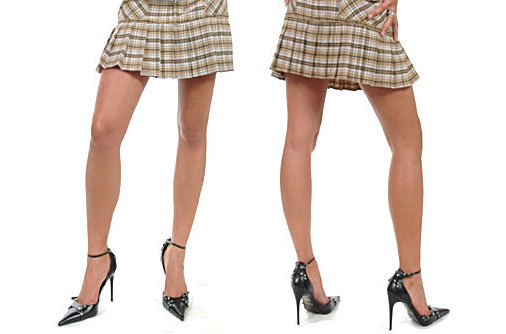 It appears you can.

Via The Consuming Instinct: What Juicy Burgers, Ferraris, Pornography, and Gift Giving Reveal About Human Nature:

Over the past nine decades, several scholars decades, several scholars have noted a correlation between economic conditions and hemlines, the so-called Hemline Index: as the economy strengthens, the miniskirts come out. On a related note, the Lipstick Index, as put forth in 2001 by Leonard Lauder, the former chief executive office of Estée Lauder, suggests that as the economy worsens, lipstick sales amplify. Finally, Elizabeth Semmelhack, curator of the Bata Shoe Museum in Toronto and author of Heights of Fashion: A History of the Elevated Shoe, has noted that the height of heels increases during difficult economic times. Several plausible arguments have been offered to explain these related phenomena, including women’s desire to signal confidence or austerity (in the case of the Hemline Index), and to self-indulge or engage in escapism when facing challenging times. However, none recognizes the possibility that evolutionary-based biological forces might otherwise explain these intriguing relationships between fashion styles and economic conditions.

Several evolutionary-minded scholars have argued that the link between economic conditions and women’s attire (e.g., as captured via the length of hemlines) is shaped by female intrasexual rivalry. In one study, women’s fashions as represented in UK Vogue between 1916 and 1999 were examined. Tougher economic climates, which typically engender greater intrasexual rivalry, yielded fashion trends that were less conservative (contrary to the Hemline Index). Physical attributes are most likely to be used by women as a form of intrasexual competition, including in the economic sphere. In a similar vein, Nigel Barber, a fellow Psychology Today blogger, uncovered a negative correlation between the length of skirts and the number of educated women in society (in any given period).

Formal research has backed some of this up:

Although consumer spending typically declines in economic recessions, some observers have noted that recessions appear to increase women’s spending on beauty products-the so-called lipstick effect. Using both historical spending data and rigorous experiments, the authors examine how and why economic recessions influence women’s consumer behavior. Findings revealed that recessionary cues-whether naturally occurring or experimentally primed-decreased desire for most products (e.g., electronics, household items). However, these cues consistently increased women’s desire for products that increase attractiveness to mates-the first experimental demonstration of the lipstick effect. Additional studies show that this effect is driven by women’s desire to attract mates with resources and depends on the perceived mate attraction function served by these products. In addition to showing how and why economic recessions influence women’s desire for beauty products, this research provides novel insights into women’s mating psychology, consumer behavior, and the relationship between the two.

5 things your clothes are saying about you

Why are high heels sexy?