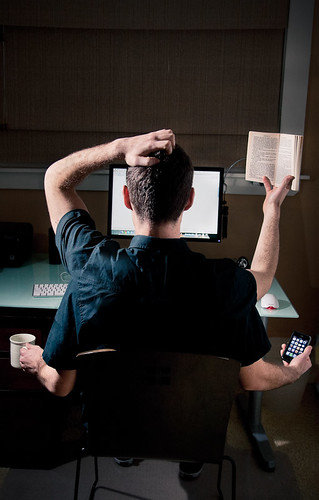 First, the bad news: your brain was never designed to multitask well:

To put it bluntly, research shows that we can’t multitask. We are biologically incapable of processing attention-rich inputs simultaneously.

Across the board multitasking lowers productivity:

Our results show that multitasking is bad for productivity even if one is not concerned with average duration.

Neither gender is better at it:

We do not find any evidence for gender differences in the ability to multitask.

But if multitasking doesn’t work, why do we do it so often? It makes us more emotionally satisfied, even if it makes us less productive:

“…they seem to be misperceiving the positive feelings they get from multitasking. They are not being more productive – they just feel more emotionally satisfied from their work.“

So you’re probably going to keep doing it anyway. Is there any way to get the emotional boost and not have it reduce your productivity so much?

Yes. Playing video games might makes you a better multitasker: