How can you save a lot of money on wine? 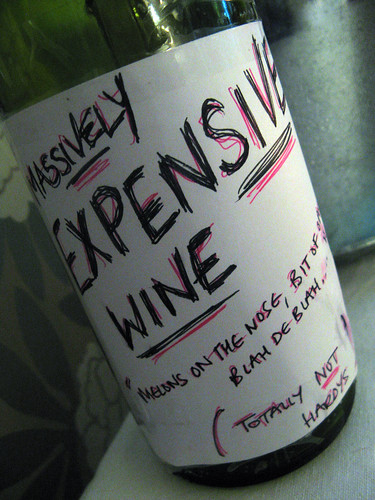 Researchers from Stanford and the California Institute of Technology recently asked twenty volunteers to taste and evaluate five wine samples that were labeled according to price: $5, $10, $35, $45, and $90 a bottle. The volunteers were similar to many of us: they were moderate wine drinkers but not experts. And after tasting the wine, they replied as you or I might: they liked the expensive wine best.

But, as you might suspect, the researchers pulled a switcheroo on them. The $90 wine actually appeared twice—once in the $90 bottle and once in the $10 bottle. The same for the $45 wine: it appeared in the $45 bottle, but also in the $5 bottle. But the tasters never noticed; no matter what, they preferred the wine when it was in the more expensive bottle. And this was not simple snobbery at work. Brain scans showed that the higher-priced wines generated more activity in an area of the brain (the medial orbitofrontal cortex) that responds to certain pleasurable experiences. And when the drinkers drank the cheap wines? Their brains actually registered less pleasure from the experience.

And the same goes for medication as well:

The same process affects the way we rate medicines. In one shocking experiment (and I mean that literally), eighty-two men and women were asked to rate the pain caused by electric shocks applied to their wrists. In particular, they were asked to rate the pain at two different times: once after receiving the shock and again after they had taken a pill for their pain. Half of the people were informed that the pill they took was a newly approved prescription pain reliever that cost $2.50 per dose. The other half was informed that the pill cost just ten cents a dose. In both cases the medicines were dummy pills, known as placebos, with no pain-relieving qualities at all. The results: 85 percent of those using the expensive pills reported significant pain relief, with only 61 percent for those who took the cheaper pills.

5 things you need to know about alcohol

Are you more creative when you’re drunk?

Do drinking and smoking make you wealthier?