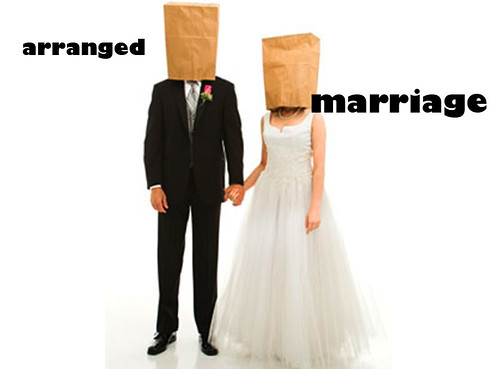 Marriages based on love start out with higher marks for closeness (70) but over time fall much further (40).

Arranged marriages start off lower (58) but in the end rise almost to the initial scores for love marriages (68).

Via The Art of Choosing:

Usha Gupta and Pushpa Singh of the University of Rajasthan decided that this was a question worth exploring. They recruited 50 couples in the city of Jaipur, half of whom had had arranged marriages. The other half had married based on love. The couples had been together for varying lengths of time, ranging from 1 to 20 years. Was one set of couples enjoying greater marital bliss than the other? Each person separately completed the Rubin Love Scale, which measured how much he or she agreed with statements like “I feel that I can confide in my husband/ wife about virtually everything” and “If I could never be with my [loved one], I would feel miserable.” The researchers then compared the responses, not only on the dimension of love versus arranged marriage, but also by the length of time that the couples had been married. The couples who had married for love and been together less than a year averaged a score of 70 points out of a possible 91 on the love scale, but these numbers steadily fell over time. The love couples who had been married ten years or longer had an average score of only 40 points. In contrast, the couples in arranged marriages were less in love at the outset, averaging 58 points, but their feelings increased over time to an average score of 68 at the ten or more years mark.

Is it possible that love marriages start out hot and grow cold, while arranged marriages start cold and grow hot… or at least warm? This would make sense, wouldn’t it? In an arranged marriage, two people are brought together based on shared values and goals, with the assumption that they will grow to like each other over time, much in the same way that a bond develops between roommates or business partners or close friends. On the other hand, love marriage is based primarily on affection: People often speak of the immediate chemistry that drew them together, the spark that they took as a sign they were meant to be. But in the words of George Bernard Shaw, marriage inspired by love brings two people together “under the influence of the most violent, most insane, most delusive, and most transient of passions. They are required to swear that they will remain in that excited, abnormal, and exhausting condition continuously until death do them part.” Indeed, both surveys and direct measurements of brain activity show that by the time couples have been together for 20 years, 90 percent have lost that all-consuming passion they initially felt.