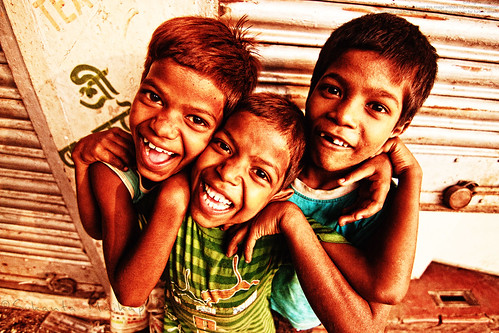 I’ve posted before that the downtrodden of Calcutta are far happier than you’d think, given their circumstances. It demonstrates how relatively unimportant money can be to individual well-being.

This takes it further, showing how even in a rich country, life can feel much worse when we lack the things that are really key to enjoying life.

Common sense would have us believe that Calcutta’s poor are overwhelmingly dissatisfied. Astonishingly this is not so. Their overall life satisfaction is slightly negative (1.93 on a scale of 1 to 3), lower than Calcutta University students (2.43). But in many domains of life their satisfaction is high: morality (2.56), family (2.50), friends (2.40) and food (2.55). Their lowest satisfaction in a specfic domain is income (2.12.)…

When Biswas-Diener compares the pavement dwellers of Calcutta to the the street people of Fresno, California, however, he finds striking differences in favor of India. Among the seventy-eight street people, average life satisfaction is extremely low (1.29), markedly lower than the Calcutta pavement dwellers (1.60). There are a few domains in which satisfaction is moderate, such as intelligence (2.27) and food (2.14), but most are distressingly unsatisfying: income (1.15), morality (1.96), friends (1.75), family (1.84), and housing (1.37).

What are your relationships worth, in dollars?