Can skipping breakfast lead to murder? 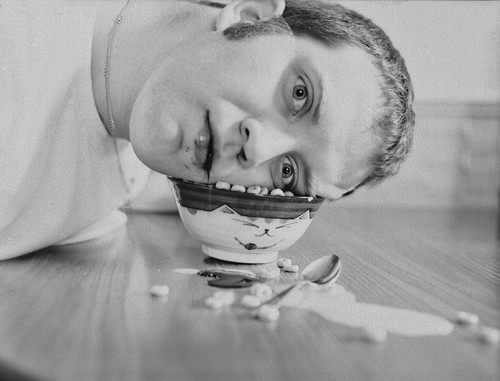 The book Willpower: Resdiscovering the Greatest Human Strength points out some fascinating connections between eating, self-control and violent behavior.

Kids who skip breakfast misbehave more than kids who eat their Wheaties. After given a snack, all the children are little angels again:

Yes, kids being brats is a far cry from homicide — but the connection goes deeper than that. Diabetics show more pronounced issues when they don’t monitor their blood sugar properly:

Researchers testing personality have found that diabetics tend to be more impulsive and have more explosive temperaments than other people their age. They’re more likely to get distracted while working on a time-consuming task. They have more problems with alcohol abuse, anxiety, and depression. In hospitals and other institutions, diabetics throw more tantrums than other patients. In everyday life, stressful conditions seem to be harder on diabetics. Coping with stress typically takes self-control, and that’s difficult if your body isn’t providing your brain with enough fuel.

And you don’t have to be full-on diabetic. People who have low blood sugar are far more prone to criminal and violent behavior:

The link between glucose and self-control appeared in studies of people with hypoglycemia, the tendency to have low blood sugar. Researchers noted that hypoglycemics were more likely than the average person to have trouble concentrating and controlling their negative emotions when provoked. Overall, they tended to be more anxious and less happy than average. Hypoglycemia was also reported to be unusually prevalent among criminals and other violent persons, and some creative defense attorneys brought the low-blood-sugar research into court.

And this isn’t an obscure phenomenon.

Whatever the legal or moral merits of that argument, there certainly was scientific data showing a correlation between blood sugar and criminal behavior. One study found below-average glucose levels in 90 percent of the juvenile delinquents recently taken into custody. Other studies reported that people with hypoglycemia were more likely to be convicted of a wide variety of offenses: traffic violations, public profanity, shoplifting, destruction of property, exhibitionism, public masturbation, embezzlement, arson, spouse abuse, and child abuse. In one remarkable study, researchers in Finland went into a prison to measure the glucose tolerance of convicts who were about to be released. Then the scientists kept track of which ones went on to commit new crimes. Obviously there are many factors that can influence whether an ex-con goes straight: peer pressure, marriage, employment prospects, drug use. Yet just by looking at the response to the glucose test, the researchers were able to predict with greater than 80 percent accuracy which convicts would go on to commit violent crimes.

I don’t know about you, but I’m going to go eat something.

Join over 135,000 readers and get my free weekly email update here.