When does the word “we” indicate a good relationship? When can it save your life? 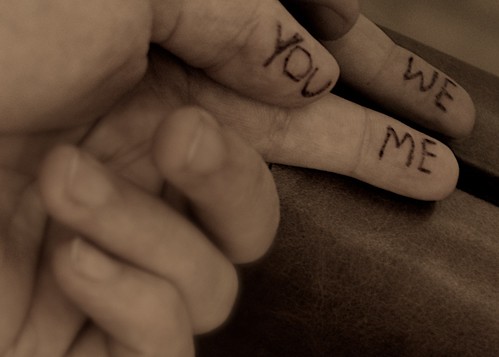 Using “we” when talking to a third party about the relationship was a very good sign. “You” words were more common in toxic conversations and bad relationships.

The more a heart patient’s spouse used we-words during an interview, the healthier the patient was in six months.

From James Pennebaker’s book The Secret Life of Pronouns: What Our Words Say About Us:

A couple’s use of we-words when talking to a third party predicts a satisfying relationship. However, we use for couples talking only to each other rarely predicts the quality of the relationship.

In the laboratory, when talking about marital disagreements, we-words indicated a good relationship whereas the use of you-words suggested problems. The use of you-words, such as you, your, and yourself, were most apparent in toxic conversations—usually where the two participants were accusing each other of various shortcomings.

We-words may even save your life. In one project, patients with heart failure were interviewed with their spouses. They were asked a series of questions, including “As you think back on how the two of you have coped with the heart condition, what do you think you have done best?” The more the spouses used we-words in their answers, the healthier the patients were six months later. The use of we-words by spouses indicated that they viewed their partner’s health problem as a shared problem that both were committed to fixing. When both members of the relationship were working together to cope with the illness, it reduced the physical and emotional stress on the patient.

What does your use of the word “I” say about you?

Can you tell whether a company is in trouble by the words its employees use?

Can your choice of words tell me if you’re depressed, suicidal or lying?