What personality traits do SWAT team members have? 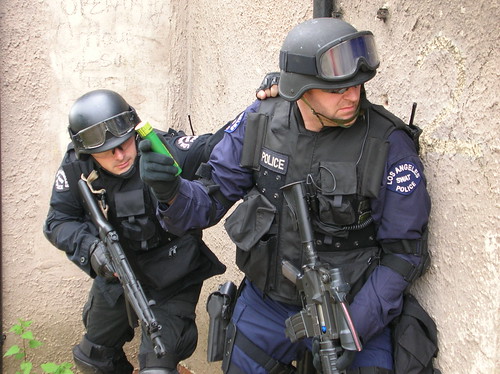 They differed from the average person by being extremely confident (“self-deceptive enhancement”), more emotionally stable and more resilient:

The present study was aimed at investigating whether different personality profiles could be found among Italian police Special Force (SF) officers. Our hypothesis was that different personality profiles would be found, and that they would differ with respect to psychological and organizational functioning. This conjecture was tested on anonymously collected Big Five scores of all members of a ‘Reparto Mobile’ unit (n = 289) by means of a Two-Step cluster analysis. Two distinct personality profiles were found: two-thirds of participants showed a personality profile that was quite similar to the general population, with the exception of a higher self-reported emotional stability and self-deceptive enhancement, while the remaining third showed higher levels of any personality domain than both the other cluster and the general population. These officers also endorsed lower scores in measures of depression, anxiety, professional exhaustion, loss of empathy, and higher scores in a measure of organizational resilience, suggesting that they may represent the most suitable personnel for the delicate tasks their unit usually has to accomplish. In addition, self-deceptive enhancement emerged as a likely personality trait of police SF officers.

Can you use hostage negotiation techniques to improve your life at work and at home?

What 7 negotiating tricks can we learn from FBI hostage negotiators?