Is “grit” the most important quality to possess? 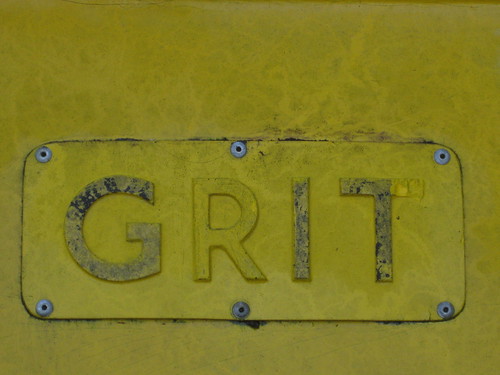 Intelligence and creativity are great but you can’t quit when the going gets tough if you ever really want to accomplish anything big.

Researchers have found that it exists apart from IQ and is more predictive of success than IQ in a variety of challenging environments from Ivy League schools to military academies to the National Spelling Bee:

The importance of intellectual talent to achievement in all professional domains is well established, but less is known about other individual differences that predict success. The authors tested the importance of 1 noncognitive trait: grit. Defined as perseverance and passion for long-term goals, grit accounted for an average of 4% of the variance in success outcomes, including educational attainment among 2 samples of adults (N = 1,545 and N = 690), grade point average among Ivy League undergraduates (N = 138), retention in 2 classes of United States Military Academy, West Point, cadets (N = 1,218 and N = 1,308), and ranking in the National Spelling Bee (N = 175). Grit did not relate positively to IQ but was highly correlated with Big Five Conscientiousness. Grit nonetheless demonstrated incremental predictive validity of success measures over and beyond IQ and conscientiousness. Collectively, these findings suggest that the achievement of difficult goals entails not only talent but also the sustained and focused application of talent over time.

We hear so much about Deliberate Practice (the “10,000 hours rule” of mastery featured in Malcolm Gladwell’s bestseller Blink) but what most people don’t realize is that without grit deliberate practice never gets us anywhere near hour 9,999:

The expert performance framework distinguishes between deliberate practice and less effective practice activities. The current longitudinal study is the first to use this framework to understand how children improve in an academic skill. Specifically, the authors examined the effectiveness and subjective experience of three preparation activities widely recommended to improve spelling skill. Deliberate practice, operationally defined as studying and memorizing words while alone, better predicted performance in the National Spelling Bee than being quizzed by others or reading for pleasure. Rated as the most effortful and least enjoyable type of preparation activity, deliberate practice was increasingly favored over being quizzed as spellers accumulated competition experience. Deliberate practice mediated the prediction of final performance by the personality trait of grit, suggesting that perseverance and passion for long-term goals enable spellers to persist with practice activities that are less intrinsically rewarding—but more effective—than other types of preparation.

Grit is one of the key reasons why we see such differing levels of achievement between people of the same intelligence and talent levels:

In a qualitative study of the development of world-class pianists, neurologists, swimmers, chess players, mathematicians, and sculptors, Bloom (1985) noted that “only a few of [the 120 talented individuals in the sample] were regarded as prodigies by teachers, parents, or experts” (p. 533). Rather, accomplished individuals worked day after day, for at least 10 or 15 years, to reach the top of their fields. Bloom observed that in every studied field, the general qualities possessed by high achievers included a strong interest in the particular field, a desire to reach “a high level of attainment” in that field, and a “willingness to put in great amounts of time and effort” (p. 544). Similarly, in her study of prodigies who later made significant contributions to their field, Winner (1996) concluded, “Creators must be able to persist in the face of difficulty and overcome the many obstacles in the way of creative discovery. . . . Drive and energy in childhood are more predictive of success, if not creativity, than is IQ or some other more domain-specific ability” (p. 293).

The qualitative insights of Winner (1996), Bloom (1985), and Galton (1892), coupled with evidence gathered by the current investigation and its forerunners, suggest that, in every field, grit may be as essential as talent to high accomplishment.

How can we get “get grittier”?

There’s evidence that grit increases as we age:

Older individuals tended to be higher in grit than younger individuals, suggesting that the quality of grit, although a stable individual difference, may nevertheless increase over the life span.

Personally, I don’t want to wait around.

Once again, grit isn’t tied to intelligence or some other seemingly unmoving score; it’s part of your personality. And finally, it’s all in the choices you make.

Deliberate Practice is the process that guides how you should approach your work or art.

Grit is a far less complex concept in the end:

Just don’t give up.