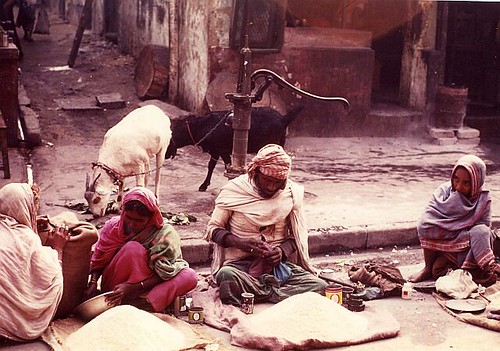 Calcutta, India is regarded as one of the poorest and most unpleasant places to live:

There is, perhaps, no city in the world that is so commonly thought of as synonymous with “poverty” than Calcutta, India. By some estimates forty per cent of India’s population and as many as fifty per cent of the children in Calcutta live beneath the poverty line (OFFER, 1999). Its notorious nickname, “the black hole of Calcutta” conjures an image in the minds of many westerners of a metropolis full of miserable people.

Source: “MAKING THE BEST OF A BAD SITUATION: SATISFACTION IN THE SLUMS OF CALCUTTA” from Social Indicators Research 55: 329–352, 2001.

Circumstances are incredibly difficult. 20 of the 73 people surveyed said they suffered from poor health. 10 mentioned a friend or relative dying in the past year:

Clearly, members of these communities are living in extremely adverse conditions. They suffer from poor health and sanitation, live in crowded conditions, and occupy dwellings of poor quality. Examples of the negative memories reported were “I did not eat yesterday,” “I had to have an operation,” and “a relative died.” In fact, of the seventy-three respondents who completed the memory measure, 20 mentioned poor health and 10 mentioned a friend or relative dying within the past year.

Interviewing Calcutta’s slumdwellers, prostitutes and homeless researchers found they were less happy than average but much more happy than one might expect:

Eighty three people in the slums of Calcutta, India were inter- viewed, and responded to several measures of subjective well-being. The respon- dents came from one of three groups: Those living in slum housing, sex workers (prostitutes) residing in brothels, and homeless individuals living on the streets. They responded to questions about life satisfaction and satisfaction with various life domains, as well as to a memory recall measure of good and bad events in their lives. While the mean rating of general life satisfaction was slightly negative, the mean ratings of satisfaction with specific domains were positive. The conclusion is that the slum dwellers of Calcutta generally experience a lower sense of life satisfaction than more affluent comparison groups, but are more satisfied than one might expect.

How can these people possibly be happy?

The problem isn’t with them, it’s with us. We’re falling prey to what’s called a “focusing illusion.” All we’re thinking about is money and living standards and not the other factors that are often more responsible for happiness than we give them credit for: religion/meaning, family, marriage and friends:

How, then, can they be happy? The very fact that we ask this question is indicative of our heavy prejudice against poverty and our stereotypes of the poor. Perhaps we should be asking why we assume they are miserable.

To help us answer the question of why we believe disadvantaged people are miserable, Kahneman and Schkade (1997) propose the idea of the “focusing illusion.” The idea is that people judge the standards of the lives of others based on a few focal attributes, such as a personal deficit or material wealth. For example, we might perceive a newly divorced person as depressed or a lottery winner as happy, but if we expand the scope of focus to include many aspects of these individuals’ lives, we may see a different picture. In the case of Calcutta, much of our attention remains focused on the image of poverty and its related ills. However, broader examination reveals a richer picture with positive life aspects. The participants in this study do not report the kind of suffering we expect. Rather, they believe they are good (moral) people, they often are religious (and religion has been shown to be associated with SWB, Diener et al., 1999), and, they have rewarding families (marriage is associated also, Diener et al., 1999). They have satisfactory social lives and enjoy their food. So the complete picture requires not just focus on the deficits of poverty and poor health but includes the positive aspects of the respondents’ lives. In this way we can see that broad- ening the focus of attention provides us with more information and a more positive picture.