Are Mondays really that bad? 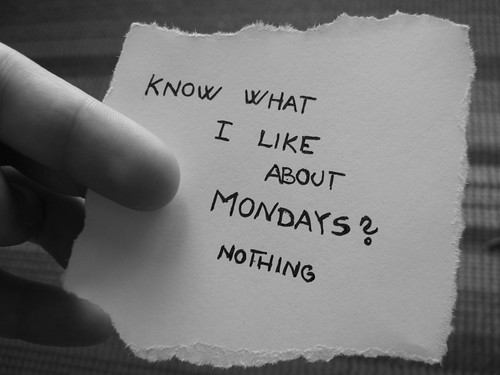 The so-called ‘‘weekend effect’’is a well-known phenomenon in the stock market (Keim & Stambaugh, 1984). This relates to significantly lower stock returns on Monday in comparison with other days of the week. It is suggested that this effect could be a result of traders’ fading optimism between Friday and Monday. Interestingly, similar ‘‘weekend effects’’ can also be found in health-related matters. The number of suicides, for example, is higher on Monday in comparison with other days (McCleary, Chew, Hellsten, & Flynn-Bransford, 1991). In addition, calls to the AIDS-STI telephone hotline, an information helpline that people call mainly when they are concerned about their personal risk on having contracted a sexually transmitted infection (STI) (Mevissen et al., 2011a), also peak on Monday (M. Mientjes, STI AIDS Netherlands, personal communication).

Funny thing is, Mondays aren’t that bad in terms of our mood.

In his bestselling book Stumbling on Happiness, Harvard happiness expert Daniel Gilbert points to research showing we overestimate how unhappy Mondays make us:

And traffic isn’t worse on Mondays. Tim Harford does the research and shows it’s generally much lighter than Tuesday, Wednesday and Thursday:

Inrix, who supply data to in-car satellite navigation systems, reports that the worst mornings of the week – in the US, at least – are actually Tuesday, Wednesday and Thursday. Monday and Friday are low-congestion mornings. Friday evenings are bad, but Monday evenings are particularly quiet. My guess is that Monday is a popular day to take a holiday or call in sick.

So why do we still not like Mondays? Because we’re focused on how we predict we’ll feel, not how we actually feel in the moment:

An Internet survey revealed that day-of-the-week (DOW) stereotypes (i.e., “Monday blues”, “Wednesday hump day”, “TGIF”, etc.) were pronounced when subjects predicted their moods for each day of the upcoming week, less obvious when they remembered their moods from each day of the preceding week, and least apparent in the momentary moods they actually experienced on each day. In a second study involving 2-hour, in-home interviews, subjects reporting looking forward to weekends because of the lack of structure and discipline and the freedom to choose activities, yet much of their weekend time was spent fulfilling a need to be productive, which often involved activities that, in many ways, simulated paid work. The content of these interviews suggested that people tend to overvalue future discretionary time on the weekend, assuming that two days of uninterrupted idle time will be more enjoyable than it actually is. In a more general sense, these results suggest that the predicted and remembered moods in the initial survey were driven by DOW stereotypes, which facilitated rapid judgements given the simple scaled response format. However, the depth interviews revealed that moods experienced throughout the week are more nuanced in terms of how they are remembered, described, and linked to recently passed, current, and immediately anticipated events, perhaps explaining why DOW stereotypes were less obvious in the reported momentary moods.

Source: “(Tell me why) I don’t like Mondays: Does an overvaluation of future discretionary time underlie reported weekly mood cycles?” from “Cognition & Emotion”

What’s the secret to making your weekends more enjoyable?

Which is more likely to kill you: being admitted to the hospital on Sunday or Monday?