8 ways that money can buy happiness: 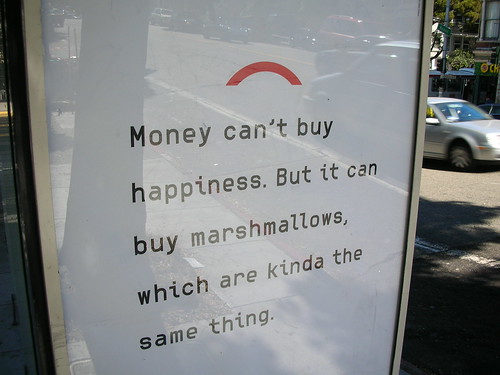 Another paper from Harvard happiness expert Daniel Gilbert (author of the bestseller Stumbling on Happiness) spells out 8 ways we can spend our money to increase happiness:

Source: “If Money Doesn’t Make You Happy Then You Probably Aren’t Spending It Right” from Journal of Consumer Psychology

Why? We quickly take material goods for granted. Research shows this happens more slowly with experiences. Also, we anticipate and remember experiences more, savoring them for longer and squeezing more enjoyment from them.

2) “Use their money to benefit others rather than themselves”

Yup, giving is better than receiving:

Dunn, Aknin, and Norton (2008) asked a nationally representative sample of Americans to rate their happiness and to report how much money they spent in a typical month on (1) bills and expenses, (2) gifts for themselves, (3) gifts for others, and (4) donations to charity. The first two categories were summed to create a personalspending composite, and the latter two categories were summed to create a prosocial spending composite. Although personal spending was unrelated to happiness, people who devoted more money to prosocial spending were happier, even after controlling for their income.

The benefits of prosocial spending appear to be cross- cultural. Over 600 students attending universities in Canada and in the East African nation of Uganda were randomly assigned to reflect on a time they had spent money on themselves or on others (Aknin et al., 2010). Participants felt significantly happier when they reflected on a time they had spent money on others, and this effect emerged consistently across these vastly different cultural contexts—even though the specific ways in which participants spent their money varied dramatically between cultures.

3) “Buy many small pleasures rather than fewer large ones”

When it comes to happiness, frequency beats intensity:

Indeed, across many different domains, happiness is more strongly associated with the frequency than the intensity of people’s positive affective experiences (Diener, Sandvik, & Pavot, 1991). For example, no one finds it surprising that people who have sex are happier than people who don’t (Blanchflower & Oswald, 2004), but some do find it surprising that the optimal number of sexual partners to have in a twelve-month period is one. Why would people who have one partner be happier than people who have many? One reason is that multiple partners are occasionally thrilling, but regular partners are regularly enjoyable. A bi-weekly ride on a merry-go-round may be better than an annual ride on a roller coaster.

Why? One reason is that we’re less likely to adapt and take for granted all these little things regularly affecting us than we are the one, big rare event:

One reason why small frequent pleasures beat infrequent large ones is that we are less likely to adapt to the former. The more easily people can understand and explain an event, the quicker they adapt to it (Wilson & Gilbert, 2008), and thus anything that makes a pleasurable event more difficult to understand and explain will delay adaptation. These variables include novelty (we’ve never experienced the event before), surprise (we didn’t expect it to happen), uncertainty (we’re not entirely sure what the event is), and variability (the event keeps changing). Each of these variables makes an event harder to understand and as a result we pay more attention to it and adapt more slowly.

4) “Eschew extended warranties and other forms of overpriced insurance”

Research shows we deal with bad events much more effectively than we think. Often we buy insurance to make us feel better, not because we couldn’t actually afford to replace the item.

Warranties are acknowledged to be a poor investment:

With price tags reaching as high as 50% of a product’s original cost, extended warranties sold by retailers and manufacturers provide huge benefits to the seller and are widely acknowledged to be bad bets for the buyer (Berner, 2004; Chen, Kalra, & Sun, 2009).

Anticipating pleasure can sometimes be more enjoyable than the event itself. By delaying good things we increase happiness:

But there is a second reason why consume now, pay later is a bad idea: it eliminates anticipation, and anticipation is a source of free happiness. The person who buys a cookie and eats it right away may get X units of pleasure from it, but the person who saves the cookie until later gets X units of pleasure when it is eventually eaten plus all the additional pleasure of looking forward to the event. Research shows that people can reap substantial enjoyment from anticipating an upcoming event even if the event itself is not entirely enjoyable. Examining three different vacations ranging from a trip to Europe to a bicycle trip through California, Mitchell et al (1997) found that people viewed the vacation in a more positive light before the experience than during the experience, suggesting that anticipation may sometimes provide more pleasure than consumption simply because it is unsullied by reality. Not surprisingly, then, people who devote time to anticipating enjoyable experiences report being happier in general (Bryant, 2003).

The farther things are in the future, the more abstractly we view them. Buying a summer cottage seems great — because at a distance we don’t think about repairs, a leaky roof, and mosquitoes.

We do better when we consider how our purchases will affect our future use of time and our day-to-day lives:

Thus, in thinking about how to spend our money, it is worthwhile to consider how purchases will affect the ways in which we spend our time. For example, consider the choice between a small, well-kept cottage and a larger ―fixer upper‖ that have similar prices. The bigger home may seem like a better deal, but if the fixer upper requires trading Saturday afternoons with friends for Saturday afternoons with plumbers, it may not be such a good deal after all.

Looking at lots of different options can mislead us as to the importance of various features. We end up thinking small differences may have a big impact when the truth is that most of the options will end up having no difference in our enjoyment of the item six months from now:

8) “Pay close attention to the happiness of others.”

You’re not the unique snowflake you think you are. Popular things are often popular for a reason and we do ourselves a disservice by ignoring what brings others pleasure because, very likely, we may enjoy it too: