Is the flavor really coming from the food? Or is it the bowl, the spoon, the music and the lighting? 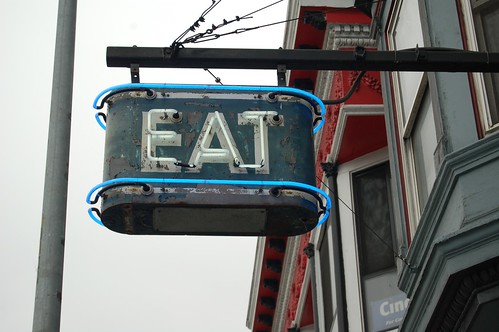 Jonah Lehrer covered a study showing that music could influence the taste of wine. In the past he’s posted on how people can’t tell the difference between red wine and white wine with red food coloring in it.

Is context really that important to what food tastes like and how much we enjoy it?

While you’re putting the right song on your iPod to make sure that Malbec explodes with flavor, you also might want to change the lightbulbs in the dining room:

It was found that the same wine was rated higher when exposed to red or blue ambient light rather than green or white light. The test persons were even willing to spend in excess of one Euro more on a specific bottle of Riesling when it was offered in red instead of green light.

“It is already known that the color of a drink can influence the way we taste it,” says Dr Daniel Oberfeld-Twistel of the General Experimental Psychology division. “We wanted to know whether background lighting, for example in a restaurant, makes a difference as well.” The survey showed, among other things, that the test wine was perceived as being nearly 1.5 times sweeter in red light than in white or green light. Its fruitiness was also most highly rated in red light.

Accordingly, one conclusion of the study is that the color of ambient lighting can influence how wine tastes, even when there is no direct effect on the color of the drink. “The extreme lighting conditions found in some bars can undoubtedly influence the way a wine tastes,” concludes Oberfeld-Twistel. He also recommends that serious wine tasting should be conducted in a neutral light color environment.

Brian Wansink, author of Mindless Eating: Why We Eat More Than We Think, instructs us to tell the guests that wine is from California, not North Dakota:

When we served them the North Dakota wine, it poisoned the entire meal. They didn’t rate the food as good, they left 10 minutes earlier, and they didn’t make reservations to come back.

When you serve dessert, put it on some fancy china, not a napkin:

We did a study where we gave people a really good brownie on a napkin, a paper plate, or a really nice piece of Wedgwood china. And we asked what they thought of the brownie.

And give them silverware, not a plasticware:

Our perception of food depends both on the contextual conditions in which it is presented and on the way the food is consumed; hence, the current trend toward investigating these contextual variables in empirical research. In most meal situations, people interact with the food that they consume by means of a variety of accessories, such as dishes and cutlery that fulfill the consumers’ functional requirements. However, despite the important role that these accessory stimuli play during the consumption of food, little research has been carried out in order to investigate how they may affect food perception. The present preliminary study was therefore undertaken in order to explore how the cutlery, specifically two teaspoons (a plastic one with metallic finish and a stainless steel one), affected consumers’ sensory and hedonic perception of yoghurt. Consumers’ quality and liking judgments concerning identical yoghurt samples differed significantly when tasted either with a metallic plastic spoon or else with a stainless steel spoon, the latter resulting in significantly higher scores.

Source: “DO THE MATERIAL PROPERTIES OF CUTLERY AFFECT THE PERCEPTION OF THE FOOD YOU EAT? AN EXPLORATORY STUDY” from Journal of Sensory Studies, Volume 26, Issue 5, pages 358–362, October 2011

Vaughan Bell points to a study showing that before you settle down in front of the TV with a movie and popcorn you might want to opt for a different colored bowl:

The flavour and pleasantness of food and drinks are affected by their colour, their texture or crunch, and even by the shape and weight of the plate or glass. But, can the colour of the bowl also affect the taste of the food it contains? To answer this question we served popcorn in four different coloured bowls, and participants rated sweetness, saltiness, and overall liking. The sweet popcorn, in addition to being sweet, was perceived as saltier when eaten out of a coloured (as compared to a white) bowl, and vice versa for the salty popcorn. These results demonstrate that colour in bowl design can be used to elicit perceptions of sweetness and saltiness in real foods.

On a diet? Make sure the plate color contrasts with the food color:

In our experiment we’d expect that when you put pasta with red sauce on a white plate, there’s a noticeable contrast, so you can see what you’re eating more easily and eat less. When the plate is the same color as the food, like our marinara sauce on a red plate, there’s less contrast and people would take more food…

It turns out people with red plates took an average of 2 ounces more than the people with white plates. It might not seem like a lot, but it can add up over time.  For this meal, that’s about 200 calories, which adds up to about two pounds a month! That’s 24 pounds a year.

For more on the quirks of eating, check check out Brian Wansink’s very interesting book Mindless Eating: Why We Eat More Than We Think.

5 easy, scientifically-proven tips for controlling your eating over the holidays

5 easy tricks to help you get back into shape

What’s the cause of the American obesity epidemic?