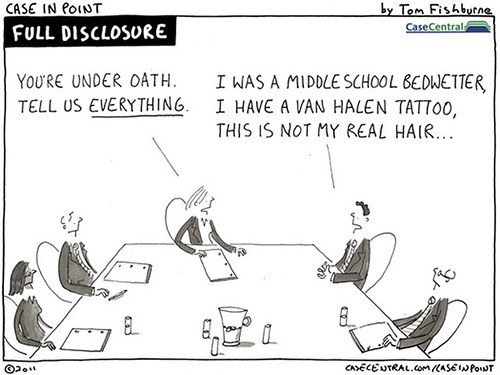 Actually, it may make things even worse.

Disclosure doesn’t solve problems the way we think it does, and in fact it can actually backfire. Coming clean about conflicts of interest, they find, can promote less ethical behavior by advisers. And though most of us assume we’d cast a skeptical eye on advice from a doctor, stockbroker, or politician with a personal stake in our decision, disclosure about conflicts may actually lead us to make worse choices.

“None of us are saying that transparency is a bad thing,” says Daylian Cain, a behavioral economist at Yale University. “But almost always, it fails to work as well as we think it does.” By assuming that disclosure is always a benefit, he and his colleagues argue, regulators may be failing to address the real problems caused by conflicts of interest. In fact, biases are rooted deep in our psychology, and can’t be dispelled with a simple confession. Policies of disclosure, far from being a panacea, may be drawing attention away from the much harder work of removing conflicts and making sure that people’s advice and their interests align.

People with a conflict gave biased advice to benefit themselves. But the twist came when the researchers required the experts to disclose this conflict to the people they were advising. Instead of the transparency encouraging more responsible behavior in the experts, it actually caused them to inflate their numbers even more. In other words, disclosing the conflict of interest — far from being a solution — actually made advisers act in a more self-serving way.

Sunita Sah, a researcher at Duke University’s Fuqua School of Business, has conducted experiments focusing on doctor-patient interactions, in which a doctor prescribes a medication but discloses a financial interest in the company that makes the drug. As expected, most people said such a disclosure would decrease their trust in the advice. But in practice, oddly enough, people were actually more likely to comply with the advice when the doctor’s bias was disclosed. Sah says that people feel an increased pressure to take the advice to avoid insinuating that they distrust their doctor.

Sah sees people complying with biased advice as a way of helping their advisers, even in one-off interactions between strangers participating in a study. “People feel pressure to behave generously even if it’s not in their best interest,” she says. In these situations, she says, “instead of being a warning, disclosure places this burden on the very people it’s supposed to protect.”