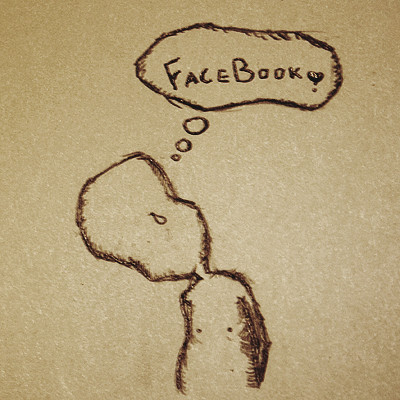 On Facebook we all show the best and not the worst, leading to portraits of unattainable lives that may very well make us feel bad by comparison:

Led by Alex Jordan, who at the time was a Ph.D. student in Stanford’s psychology department, the researchers found that their subjects consistently underestimated how dejected others were–and likely wound up feeling more dejected as a result. Jordan got the idea for the inquiry after observing his friends’ reactions to Facebook: He noticed that they seemed to feel particularly crummy about themselves after logging onto the site and scrolling through others’ attractive photos, accomplished bios, and chipper status updates. “They were convinced that everyone else was leading a perfect life,” he told me.

The human habit of overestimating other people’s happiness is nothing new, of course. Jordan points to a quote by Montesquieu: “If we only wanted to be happy it would be easy; but we want to be happier than other people, which is almost always difficult, since we think them happier than they are.” But social networking may be making this tendency worse. Jordan’s research doesn’t look at Facebook explicitly, but if his conclusions are correct, it follows that the site would have a special power to make us sadder and lonelier. By showcasing the most witty, joyful, bullet-pointed versions of people’s lives, and inviting constant comparisons in which we tend to see ourselves as the losers, Facebook appears to exploit an Achilles’ heel of human nature. And women—an especially unhappy bunch of late—may be especially vulnerable to keeping up with what they imagine is the happiness of the Joneses.

As does the idea that Facebook might aggravate this tendency. Facebook is, after all, characterized by the very public curation of one’s assets in the form of friends, photos, biographical data, accomplishments, pithy observations, even the books we say we like. Look, we have baked beautiful cookies. We are playing with a new puppy. We are smiling in pictures (or, if we are moody, we are artfully moody.) Blandness will not do, and with some exceptions, sad stuff doesn’t make the cut, either. The site’s very design—the  presence of a “Like” button, without a corresponding “Hate” button—reinforces a kind of upbeat spin doctoring. (No one will “Like” your update that the new puppy died, but they may “Like” your report that the little guy was brave up until the end.)

Jordan, who is now a postdoctoral fellow studying social psychology at Dartmouth’s Tuck School of Business, suggests we might do well to consider Facebook profiles as something akin to the airbrushed photos on the covers of women’s magazine. No, you will never have those thighs, because nobody has those thighs. You will never be as consistently happy as your Facebook friends, because nobody is that happy. So remember Montesquieu, and, if you’re feeling particularly down, use Facebook for its most exalted purpose: finding fat exes.