Can “double-checking” things be a bad idea? 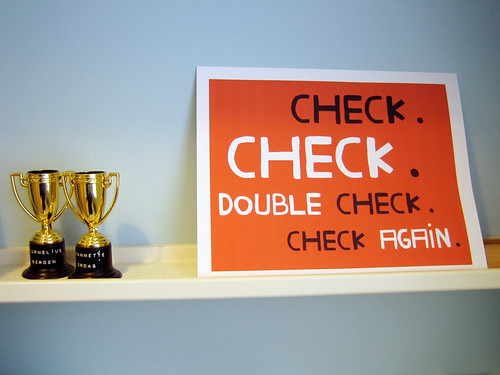 Repeated checking can cause you to lose confidence in your memory and even reduce its accuracy under certain circumstances:

A paradox of memory research is that repeated checking results in a decrease in memory certainty, memory vividness and confidence [van den Hout, M. A., & Kindt, M. (2003a). Phenomenological validity of an OCD-memory model and the remember/know distinction. Behaviour Research and Therapy, 41, 369–378; van den Hout, M. A., & Kindt, M. (2003b). Repeated checking causes memory distrust. Behaviour Research and Therapy, 41, 301–316]. Although these findings have been mainly attributed to changes in episodic long-term memory, it has been suggested [Shimamura, A. P. (2000). Toward a cognitive neuroscience of metacognition. Consciousness and Cognition, 9, 313–323] that representations in working memory could already suffer from detrimental checking. In two experiments we set out to test this hypothesis by employing a delayed-match-to-sample working memory task. Letters had to be remembered in their correct locations, a task that was designed to engage the episodic short-term buffer of working memory [Baddeley, A. D. (2000). The episodic buffer: a new component in working memory? Trends in Cognitive Sciences, 4, 417–423]. Of most importance, we introduced an intermediate distractor question that was prone to induce frustrating and unnecessary checking on trials where no correct answer was possible. Reaction times and confidence ratings on the actual memory test of these trials confirmed the success of this manipulation. Most importantly, high checkers [cf. VOCI; Thordarson, D. S., Radomsky, A. S., Rachman, S., Shafran, R, Sawchuk, C. N., & Hakstian, A. R. (2004). The Vancouver obsessional compulsive inventory (VOCI). Behaviour Research and Therapy, 42(11), 1289–1314] were less accurate than low checkers when frustrating checking was induced, especially if the experimental context actually emphasized the irrelevance of the misleading question. The clinical relevance of this result was substantiated by means of an extreme groups comparison across the two studies. The findings are discussed in the context of detrimental checking and lack of distractor inhibition as a way of weakening fragile bindings within the episodic short-term buffer of Baddeley’s (2000) model. Clinical implications, limitations and future research are considered.

Can how you sit affect your memory?