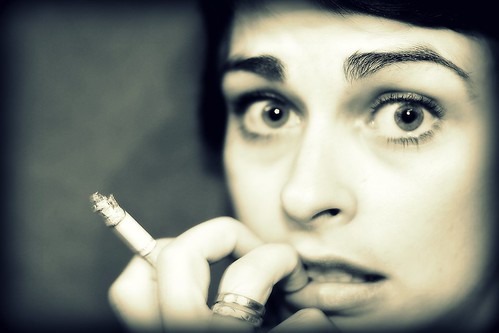 Vigiliantly monitor the behavior and fight the urge:

What strategies can people use to control unwanted habits? Past work has focused on controlling other kinds of automatic impulses, especially temptations. The nature of habit cuing calls for certain self-control strategies. Because the slow-to-change memory trace of habits is not amenable to change or reinterpretation, successful habit control involves inhibiting the unwanted response when activated in memory. In support, two episode-sampling diary studies demonstrated that bad habits, unlike responses to temptations, were controlled most effectively through spontaneous use of vigilant monitoring (thinking “don’t do it,” watching carefully for slipups). No other strategy was useful in controlling strong habits, despite that stimulus control was effective at inhibiting responses to temptations. A subsequent experiment showed that vigilant monitoring aids habit control, not by changing the strength of the habit memory trace but by heightening inhibitory, cognitive control processes. The implications of these findings for behavior change interventions are discussed.

Personally, I think that’s important but it’s only part of the solution.

What’s more powerful is manipulating your surroundings to support your efforts. Never underestimate the power of context.

And sometimes you can’t change the habit — you need to change who you are.