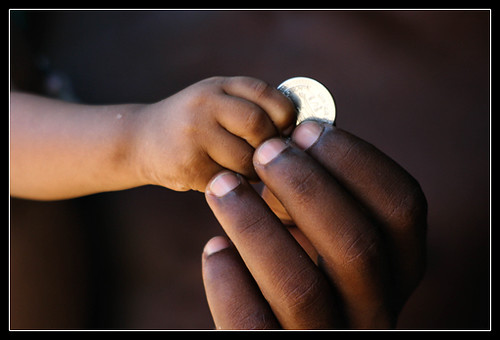 Trying to become happy via money makes us miserable and once we can pay for all the basics of life, money’s ability to increase happiness is quite minimal.

However, there are a few ways we can use money to increase our happiness and one of the key ones is, ironically, spending it on other people:

via The Boston Globe:

What if, for example, she spent it not on a new flat-screen television or sectional sofa, but on other people? One of the most consistent findings of the happiness literature is that having a strong social network is an excellent predictor of happiness, and it seemed plausible that you could use money to buy happiness that way. She teamed up with Michael Norton, a psychologist and assistant professor at Harvard Business School, and the two embarked on a series of experiments to test whether spending money on others actually makes us happier than spending it on ourselves.

First, they surveyed 632 Americans on their general happiness, along with what they spent their money on, and found that higher “prosocial spending” – gifts for others and donations to charity – was indeed correlated with higher self-reported happiness. They followed this up with a more detailed look at 16 workers before and after they received a profit-sharing bonus from their company. They found that the only factor that reliably predicted which workers would be happy six to eight weeks after the bonus was their prosocial spending – the more money people spent on charity and gifts for others, the happier they were.

But was the happiness caused by giving money away, or were charitable people simply happier to start with? To show a causative link, they then performed an experiment in which volunteer test subjects were given a small windfall of $5 to $20. Some of the subjects, chosen at random, were told to spend it on a bill, an expense, or a gift for themselves. The others were told to buy a gift for someone else or make a charitable donation. Afterwards, the second group – the ones who had given the money away – reported being significantly happier than those who had spent the money on their own needs.

Dunn and Norton published their results in the journal Science in March 2008. The lesson of their study, says Dunn, is clear. Money makes you most happy if you don’t spend it on yourself.

“By that I do not mean give all your money away and live in a shack,” she says. “I just mean think about increasing it slightly. Just reallocating as little as $5 on a given day can make a difference in happiness.”

Is there a proven system for making yourself happier?