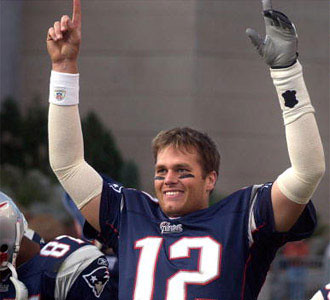 Yes. They asked women who didn’t know anything about football to rate how handsome NFL quarterbacks were. The guys who were great on the field also received the highest marks for looks.

Via Gad Saad, author of The Consuming Instinct: What Juicy Burgers, Ferraris, Pornography, and Gift Giving Reveal About Human Nature:

Kevin M. Williams, Justin H. Park, and Martijn B. Wieling recently published a paper in Personality and Individual Differences in which they explored this exact issue using NFL quarterbacks as their data set. Specifically, in each of two studies, thirty Dutch women (who are unlikely to be familiar with the quarterbacks in question) viewed photos of NFL quarterbacks and rated their facial attractiveness on a 1-10 “very unattractive” to “very attractive” scale (30 quarterbacks in the preliminary study and 58 in the larger follow-up). These attractiveness scores were subsequently correlated to the official quarterback ratings (composite metric that captures a quarterback’s efficiency). In the first study, the correlation was 0.31 (p < .05) whereas in the second larger study the coefficient for the attractiveness score (via a hierarchical regression) was 0.23 (p < .05). Bottom line: Better performing NFL quarterbacks are indeed judged as better looking.