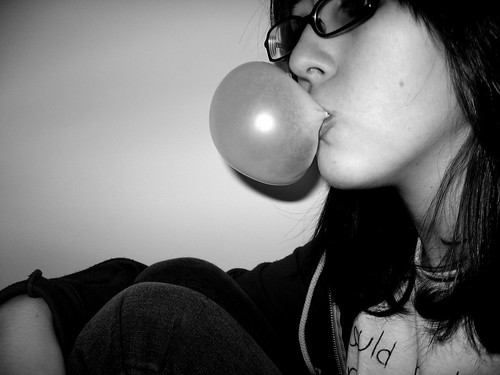 Recent reports suggest that enhancement of memory performance while chewing gum is a fairly robust phenomenon. The processes underlying the effect are not known, but may involve glucose delivery, context-dependent effects and arousal mechanisms amongst others.This brief commentary outlines the main ﬁndings from these studies and raises some issues regarding interpretation, methodology and future research directions.

2) It can reduce stress:

The notion that chewing gum may relieve stress was investigated in a controlled setting. A multi-tasking framework which reliably evokes stress and also includes performance measures was used to induce acute stress in the laboratory. Using a randomised crossover design forty participants (mean age 21.98 years) performed on the multi-tasking framework at two intensities (on separate days) both while chewing and not chewing. Order of workload intensity and chewing conditions were counterbalanced. Before and after undergoing the platform participants completed the state portion of the State-Trait Anxiety Inventory, Bond–Lader visual analogue mood scales, a single Stress Visual Analogue Scale and provided saliva samples for cortisol measurement. Baseline measures showed that both levels of the multi-tasking framework were effective in significantly reducing self-rated alertness, calmness and contentment while increasing self-rated stress and state anxiety. Cortisol levels fell during both levels of the stressor during the morning, reflecting the predominance of a.m. diurnal changes, but this effect was reversed in the afternoon which may reflect a measurable stress response. Pre–post stressor changes (Δ) for each measure at baseline were subtracted from Δ scores under chewing and no chewing conditions. During both levels of stress the chewing gum condition was associated with significantly better alertness and reduced state anxiety, stress and salivary cortisol. Overall performance on the framework was also significantly better in the chewing condition. The mechanisms underlying these effects are unknown but may involve improved cerebral blood flow and/or effects secondary to performance improvement during gum chewing.

3) It can help you stay awake:

The proposition that chewing gum can improve alertness was investigated via both physiological and self-rated measures. The Pupillographic Sleepiness Test (PST) provided a measure of pupillary unrest (PUI); a physiological index of daytime sleepiness. Chewing gum reduced the extent of sleepiness as measured by both PUI and self-rated sleepiness. Specifically, in comparison with sham chewing and no chewing controls, the chewing gum condition significantly limited the increase in pupillary unrest following the 11-minute PST within a darkened laboratory: a finding indicating moderation of the daytime sleepiness increase for the chewing gum condition. In addition, there was some evidence that chewing gum (relative to the no-chewing condition only) moderated the increase in a self-rated measure of sleepiness (Stanford Sleepiness Scale). However, there was no evidence that chewing gum moderated the decrease in self-rated alertness (Bond-Lader Visual Analogue Mood Scale). Although the precise mechanism underpinning the effect of chewing gum is unclear, the reduction in daytime sleepiness may be underpinned via heightened cerebral activity following the chewing of gum or the arousing effects of mint flavour.

Source: “The effect of chewing gum on physiological and self-rated measures of alertness and daytime sleepiness” from Physiology & Behavior

Here’s something that can make you smarter, less stressed and more awake… and teachers are famous for not letting you do it in class. Oh, irony…