Why is politics a mess? 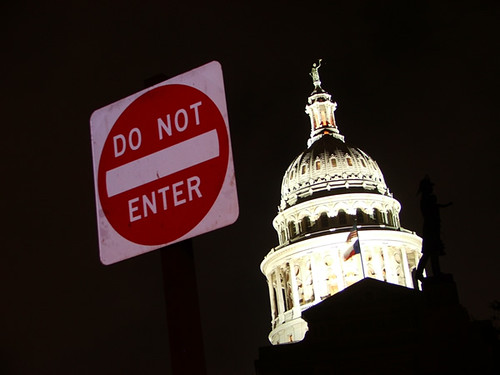 We like to blame politicians but the truth is, the way we go about picking our leaders is just as screwed up and disappointing.

We all know “appearances matter” but oh-do-they-ever; studies show we love beautiful candidates:

Are beautiful politicians more likely to be elected? To test this, we use evidence from Australia, a country in which voting is compulsory, and in which voters are given ‘How to Vote’ cards depicting photos of the major party candidates as they arrive to vote. Using raters chosen to be representative of the electorate, we assess the beauty of political candidates from major political parties, and then estimate the effect of beauty on voteshare for candidates in the 2004 federal election. Beautiful candidates are indeed more likely to be elected, with a one standard deviation increase in beauty associated with a 1½ – 2 percentage point increase in voteshare. Our results are robust to several specification checks: adding party fixed effects, dropping well-known politicians, using non-Australian beauty raters, omitting candidates of non-Anglo Saxon appearance, controlling for age, and analyzing the ‘beauty gap’ between candidates running in the same electorate. The marginal effect of beauty is larger for male candidates than for female candidates, and appears to be approximately linear. Consistent with the theory that returns to beauty reflect discrimination, we find suggestive evidence that beauty matters more in electorates with a higher share of apathetic voters.

Facial appearance alone can be enough to predict elections:

Human groups are unusual among primates in that our leaders are often democratically selected. Faces affect hiring decisions and could influence voting behavior. Here, we show that facial appearance has important effects on choice of leader. We show that differences in facial shape alone between candidates can predict who wins or loses in an election(Study 1) and that changing context from war time to peace time can affect which face receives the most votes (Study 2). Our studies highlight the role of face shape in voting behavior and the role of personal attributions in face perception. We also show that there may be no general characteristics of faces that can win votes, demonstrating that face traits and information about the environment interact in choice of leader.

An authoritative face has an important impact, right? Sorry, just being pretty is a huge part of it:

We study the role of beauty in politics using candidate photos that figured prominently in electoral campaigns. Our investigation is based on visual assessments of 1929 Finnish political candidates from 10,011 respondents (of which 3708 were Finnish). As Finland has a proportional electoral system, we are able to compare the electoral success of non-incumbent candidates representing the same party. An increase in our measure of beauty by one standard deviation is associated with an increase of 20% in the number of votes for the average non-incumbent parliamentary candidate. The relationship is unaffected by including education and occupation as control variables and withstands several other robustness checks.

Source: “The looks of a winner: Beauty and electoral success” from “Journal of Public Economics”

And apparently short people don’t make very good leaders in the mind of the public:

Since television started bringing candidates into voters’ homes for the first time roughly six decades ago, the taller candidate has won more popular votes in 12 of the last 15 presidential general elections.

Maybe to some degree we can’t help it because good-looking politicians get more news coverage:

This study develops and tests the hypothesis that physically attractive politicians receive more news coverage. The physical attractiveness of Members of the 16th Israeli Knesset (MKs) was assessed by students abroad, who did not know they were evaluating Israeli politicians. The number of times each member appeared on national television news at the time of study was obtained and used as a measure of television news coverage. Multivariate analysis demonstrated that, over and above controls for a host of factors, the physical attractiveness of the MKs was associated with their coverage in television news.

Source: “Exploring the Association between Israeli Legislators’ Physical Attractiveness and Their Television News Coverage” from The International Journal of Press/Politics, Vol. 15, No. 2, 175-192 (2010)

But facial appearance is key to our judgments and once we make up our minds those opinions are tough to change:

In a study published in Science in February, John Antonakis and Olaf Dalgas at the University of Lausanne asked students to look at pairs of photographs of political candidates who had run against each other in the 2002 French elections, and judge which of the two was more competent. They found that in 72 percent of cases, the students picked the politician who had won the seat, suggesting that voters are strongly persuaded by facial appearance. This would not be so worrying if faces held useful clues about a person’s competence or intelligence, but there is little evidence that they do. Worse, research by Alexander Todorov at Princeton University shows that we tend to make up our minds about a person’s character—how likeable, trustworthy, competent and aggressive they are—within a tenth of a second of seeing their face. Once made, these snap judgements are hard to shift.

And it’s not all about good looks. Sometimes it’s more egocentric than that — if they look like you, hey, that means they’d make a good leader:

Do we pick our political parties because they’re doing the right thing? Nah. We pick’em because we have a daughter or a son:

What determines human beings’ political preferences? Using nationally representative longitudinal data, we show that having daughters makes people more likely to vote for left-wing political parties. Having sons leads people to favor right-wing parties. The paper checks that our result is not an artifact of family stopping rules, discusses the predictions from a simple economic model, and tests for possible reverse causality.

Source: “Daughters and Left-Wing Voting” from the review of Economics and Statistics © 2010 The President and Fellows of Harvard College and the Massachusetts Institute of Technology

We used the take-­‐the-­‐best heuristic in combination with simple linear regression to develop the PollyMIP model for forecasting the incumbent’s two-­‐party share of the popular vote in U.S. presidential elections. The model is based on the theory of single-­‐issue voting: voters will select the candidate who is expected to do the best job in handling the issue that is most important to them. We used cross-­‐validation to calculate 1,000 out-­‐of-­‐sample forecasts for the last ten U.S. presidential elections from 1972 to 2008 (100 per election year). PollyMIP correctly predicted the winner of the popular vote in 97% of all forecasts. For the last six elections, it yielded a higher number of correct predictions of the election winner than the Iowa Electronic Markets (IEM), although the IEM provided more accurate predictions of the actual vote-­‐shares. In predicting the two-­‐party popular vote shares for the last three elections from 2000 to 2008, the model provided out-­‐of-­‐sample forecasts that were competitive with those from established econometric models. PollyMIP contributes new information to the forecasts; in combination with other methods, it led to substantial improvements in accuracy. Finally, in using information about the frequency of Internet searches, it allows for easy tracking of issue importance and early identification of emerging issues and, thus, can suggest which issues candidates should stress in their campaign.

Source: “Predicting elections from the most important issue facing the country” from J. Scott Armstrong, The Wharton School, University of Pennsylvania and Andreas Graefe, Karlsruhe Institute of Technology

Okay, but surely at the extremes this can’t be the case, right? Some real crazy crap must have been going on for a psycho like Hitler to get elected, right?

Wrong. A study at Harvard showed that the election of Adolf Hitler showed no special anomalies. People used the same processes they always do to pick leaders:

The enormous Nazi voting literature rarely builds on modern statistical or economic research. By adding these approaches, we find that the most widely accepted existing theories of this era cannot distinguish the Weimar elections from almost any others in any country. Via a retrospective voting account, we show that voters most hurt by the depression, and most likely to oppose the government, fall into separate groups with divergent interests. This explains why some turned to the Nazis and others turned away. The consequences of Hitler’s election were extraordinary, but the voting behavior that led to it was not.

Of course, I’m sure you, dear reader, are eminently logical, unbiased and unselfish. It’s those other people we have to watch out for:

The conventional rational voter model has problems explaining why people vote, since the costs typically exceed the expected benefits. This paper presents Swedish survey evidence suggesting that people vote based on a combination of instrumental and expressive motives, and that people are strongly influenced by a social norm saying that it is an obligation to vote. Women and older individuals are more affected by this norm than others. The more rightwing a person is, the less unethical he/she will perceive selfish voting to be. Moreover, individuals believe that they themselves vote less selfishly than others and that people with similar political views as themselves vote less selfishly than people with the opposite political views, which is consistent with social identity theory.