What two things can stop you from choking under pressure? 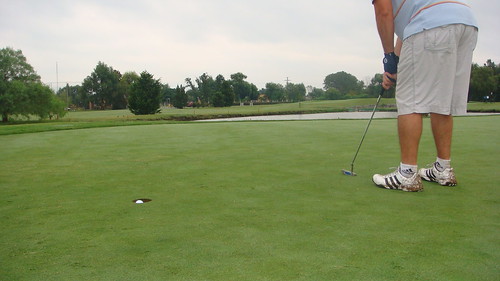 Distraction (counting backwards from 100) or having adapted to self-awareness (being videotaped in prior attempts) both prevented choking:

When pressure to perform is increased, individuals commonly perform worse than if there were no pressure (“choking under pressure’). Two mechanisms have been proposed to account for this effect-distraction (cognitive load), wherein pressure distracts attention from the task, and self focus, wherein attention shifts inward interfering with performance. To distinguish between these two competing explanations, the current experiment manipulated pressure by offering performance-contingent rewards. For half the participants, cognitive load was increased by requiring participants to count backward from 100. Additionally, adaptation to self awareness was manipulated by videotaping half the participants during practice trials. Results show that pressure caused choking when participants were not distracted and had not been adapted to self awareness. This effect was attenuated when cognitive load was increased or when self-awareness adaptation had occurred. These results support self focus mediated misregulation as the mechanism for choking and disconfirm the distraction hypothesis.

Join over 161,000 readers. Get a free weekly update via email here.