How do siblings shape your personality? 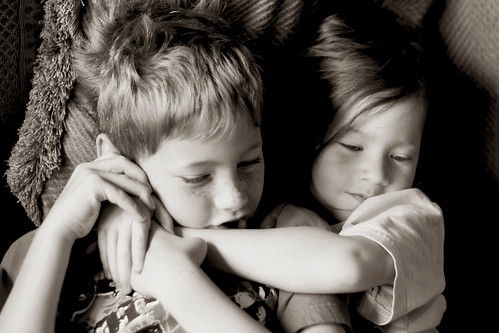 Deborah Kotz has an interesting piece in the Boston Globe that highlights research findings from the new book The Sibling Effect: What the Bonds Among Brothers and Sisters Reveal About Us:

Firstborns and only-children, for example, have a 3-point higher IQ on average compared with those born second, according to 2007 Norwegian study cited in the book, and second children are about a point ahead of those born third…

Parents can devote 100 percent of their child-raising resources to the first child until they must divide those resources when the second child comes along and so on for each additional child. To compensate for the lack of parental attention, the youngest child may develop certain personality traits — like humor, spontaneity, or gregariousness — to shift the spotlight onto themselves, Sulloway told me.

They also tend to take more risks, since they have less to lose. (In previous centuries, older siblings were more likely to survive to adulthood, and even today parents are less likely to vaccinate their youngest children than their oldest ones.) Sulloway’s recent review study found that younger brothers are more likely to participate in dangerous sports like football and boxing than their older siblings, and among sets of brothers who play professional baseball, younger siblings steal far more bases, which Sulloway pointed out is “one of the riskiest things players do.”

And siblings — especially those close in age and of the same gender — can influence each other’s bad health habits. Younger brothers and sisters are four times as likely to take up smoking, for example, when an older sibling smokes. Drug and alcohol abuse follow a similar pattern.