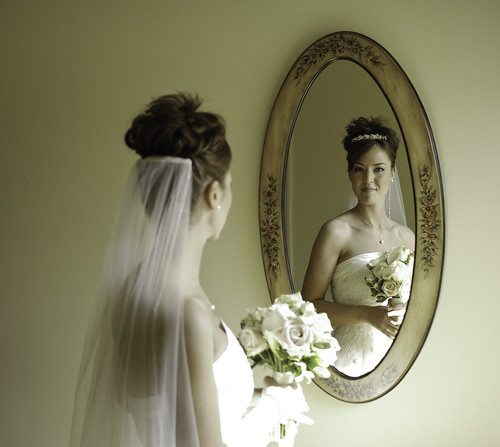 People are motivated to self-present to their potential romantic partners. We hypothesized that due to the uncertainty of paternity, one of the self-presentational behaviors that human females engage in when they are motivated to attract a long-term mate is designed to communicate to prospective partners that they are likely to be faithful. In Study 1, we show that females in a long-term-romance mindset are less likely to agree to going to a concert with another female known to be unfaithful (cheater) than with a female known to have many sexual partners (player) or a non-flirtatious control female (control). Females in the long-term-romance mindset are also less willing to be the unfaithful female’s friend and less willing to indicate that she is similar to them. In Study 2, we show that the effect is gender specific. In particular, we show that in the presence of a potential long-term partner, females (but not males) express more rejecting emotions towards a same-sex acquaintance who reveals a predilection to be unfaithful. These studies provide strong support for the role of uncertainty of paternity in the female self-presentational behaviors in the context of mate attraction.

Source: “Strategic reactions to unfaithfulness: female self-presentation in the context of mate attraction is linked to uncertainty of paternity” from Evolution and Human Behavior, Volume 32, Issue 2, Pages 106-117 (March 2011)