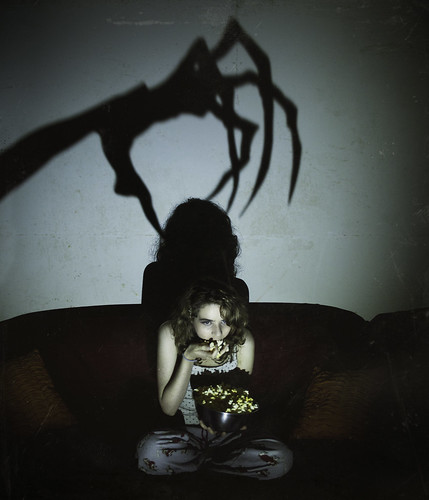 Yes: “…men who were initially considered unattractive were later judged more appealing if they displayed courage during the film viewing.”

Vaughan Bell highlights a study mentioned in Christian Jarrett’s awesome round up of Halloween science:

Related to this is the ‘snuggle theory’ – the idea that viewing horror films may be a rite of passage for young people, providing them with an opportunity to fulfil their traditional gender roles. A paper from the late 1980s by Dolf Zillmann, Norbert Mundorf and others found that male undergrads paired with a female partner (unbeknown to them, a research assistant), enjoyed a 14-minute clip from Friday the 13th Part III almost twice as much if she showed distress during the film. Female undergrads, by contrast, said they enjoyed the film more if their male companion appeared calm and unmoved. Moreover, men who were initially considered unattractive were later judged more appealing if they displayed courage during the film viewing.