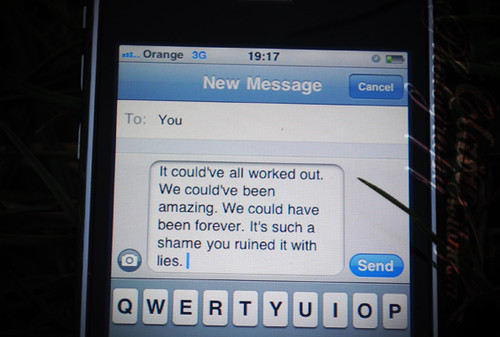 We tell the most lies to the people we feel closest to.

An online diary study was performed to investigate deception across different media. One hundred and four individuals participated in the study, with 76 completing the diaries. Individuals were most likely to lie on the telephone. Planned lies, which participants also rated the most serious, were more likely told via SMS (short message service) text messaging. Most lies were told to people participants felt closest to. The feature-based model provides a better account of the deceptions reported by participants than do media richness theory or social distance theory. However, the authors propose a reworked feature-based model to explain deception across different media. They suggest that instant messaging should be treated as a near synchronous mode of communication. We suggest that the model needs to distinguish between spontaneous and planned lies.

Source: “Not all lies are spontaneous: An examination of deception across different modes of communication” from Journal of the American Society for Information Science and Technology