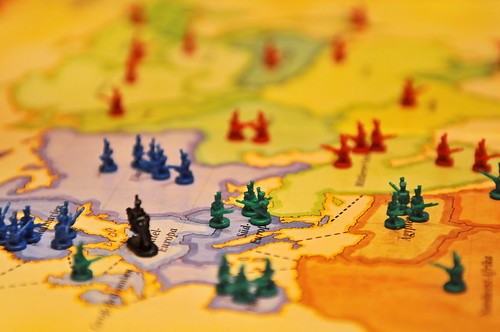 Seeing the opposite sex. (I’m not sure if that’s a good argument for or against co-ed schools.) What was interesting was attractiveness of the opposite sex person had nothing to do with it:

This paper investigates whether exposure to the opposite sex induces greater risk-taking in both males and females. Experimental subjects evaluated a series of hypothetical monetary gambles before and after viewing pictures of opposite sex faces; control subjects viewed pictures of cars. Both males and females viewing opposite sex photos displayed a significant increase in risk tolerance, whereas the control subjects exhibited no significant change. Surprisingly, the attractiveness of the photo had no effect; subjects viewing photographs of attractive opposite sex persons displayed similar results as those viewing photographs of unattractive people.

Source: “Are people more risk-taking in the presence of the opposite sex?” from Journal of Economic Psychology, Volume 30, Issue 2, April 2009, Pages 136-146

What are the most common mistakes people make in evaluating risk?