How should you pick stocks if you know nothing about the market? 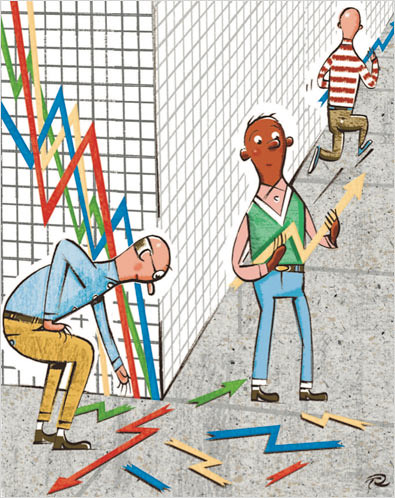 I’m not qualified to give professional investing advice — but don’t overlook how pleasant-sounding the name of the stock is:

Three studies investigated the impact of the psychological principle of fluency (that people tend to prefer easily processed information) on short-term share price movements. In both a laboratory study and two analyses of naturalistic real-world stock market data, fluently named stocks robustly outperformed stocks with disfluent names in the short term. For example, in one study, an initial investment of $1,000 yielded a profit of $112 more after 1 day of trading for a basket of fluently named shares than for a basket of disfluently named shares. These results imply that simple, cognitive approaches to modeling human behavior sometimes outperform more typical, complex alternatives.

More on the study from Princeton University:

A new study of initial public offerings (IPOs) on two major American stock exchanges shows that people are more likely to purchase newly offered stocks that have easily pronounced names than those that do not, according to Princeton’s Adam Alter and Danny Oppenheimer. The effect extends to the ease with which the stock’s ticker code, generally a few letters long, can be pronounced — indicating that, all else being equal, a stock with the symbol BAL should outperform one with the symbol BDL in the first few days of trading.

“We looked at intervals of a day, a week, six months and a year after IPO,” Alter said. “The effect was strongest shortly after IPO. For example, if you started with $1,000 and invested it in companies with the 10 most fluent names, you would earn $333 more than you would have had you invested in the 10 with the least fluent.”