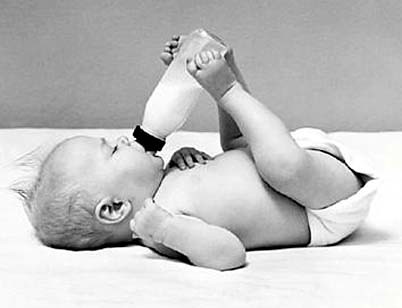 Author Jena Pincott brings us the answer — Not necessarily:

Source: “You must have been a beautiful baby: Ratings of infant facial attractiveness fail to predict ratings of adult attractiveness” from Infant Behavior and Development

From an evolutionary-psychology perspective: all babies need to be cute so we’ll take care of them when they are so dependent.

Once they’re out of infancy — and are less of a burden — future attractiveness can be much better predicted:

Examined the stability of facial attractiveness (FA) from early childhood to young adulthood by asking 100 university students to rate facial photographs of 9 males and 9 females at each of 5 age-levels: 5–8 yrs; shortly before the onset of puberty; mid-puberty; immediately postpuberty; and at 19–22 yrs of age. Low to moderate intercorrelations were found between the ratings of FA across the 5 age-levels, reflecting a significant degree of stability in FA. The rated FA of males decreased with age, but female FA may decline with age only after adolescence. Enough stability in FA from early childhood to young adulthood supports arguments that FA could influence development, but developmental changes in FA and other factors might preclude a consistent long-term effect of FA.