Could the current economic problems actually make us happier in the end? 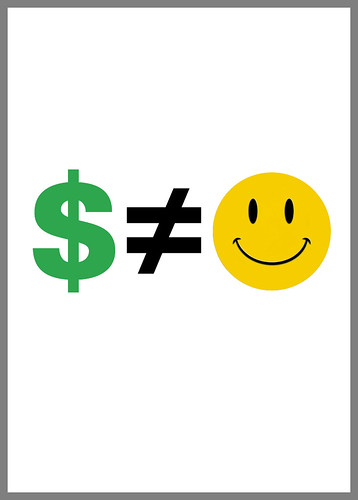 It depends on how we respond to it all. There’s an excellent article in the New York Times by Stephanie Rosenbloom about people who have simplified their lives in response to the recession — and ended up much happier for it. Some experts are saying these new habits could outlast the current economic downturn.

On the bright side, the practices that consumers have adopted in response to the economic crisis ultimately could — as a raft of new research suggests — make them happier. New studies of consumption and happiness show, for instance, that people are happier when they spend money on experiences instead of material objects, when they relish what they plan to buy long before they buy it, and when they stop trying to outdo the Joneses… While the current round of stinginess may simply be a response to the economic downturn, some analysts say consumers may also be permanently adjusting their spending based on what they’ve discovered about what truly makes them happy or fulfilled.

According to retailers and analysts, consumers have gravitated more toward experiences than possessions over the last couple of years, opting to use their extra cash for nights at home with family, watching movies and playing games — or for “staycations” in the backyard. Many retailing professionals think this is not a fad, but rather “the new normal.” “I think many of these changes are permanent changes,” says Jennifer Black, president of the retailing research company Jennifer Black & Associates and a member of the Governor’s Council of Economic Advisors in Oregon. “I think people are realizing they don’t need what they had. They’re more interested in creating memories.”

One reason that paying for experiences gives us longer-lasting happiness is that we can reminisce about them, researchers say. That’s true for even the most middling of experiences. That trip to Rome during which you waited in endless lines, broke your camera and argued with your spouse will typically be airbrushed with “rosy recollection,” says Sonja Lyubomirsky, a psychology professor at the University of California, Riverside. Professor Lyubomirsky has a grant from the National Institute of Mental Health to conduct research on the possibility of permanently increasing happiness. “Trips aren’t all perfect,” she notes, “but we remember them as perfect.” Another reason that scholars contend that experiences provide a bigger pop than things is that they can’t be absorbed in one gulp — it takes more time to adapt to them and engage with them than it does to put on a new leather jacket or turn on that shiny flat-screen TV.

BEFORE credit cards and cellphones enabled consumers to have almost anything they wanted at any time, the experience of shopping was richer, says Ms. Liebmann of WSL Strategic Retail. “You saved for it, you anticipated it,” she says. In other words, waiting for something and working hard to get it made it feel more valuable and more stimulating.

Join over 300,000 readers. Get a free weekly update via email here.