Can text messages make you healthier and richer? 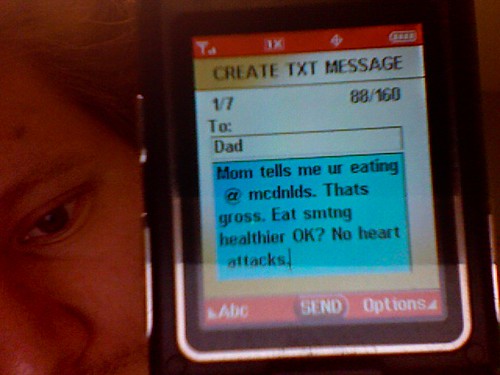 A very interesting Slate article by Daniel Gross says they can:

…a study by four Ivy League economists—Dean Karlan of Yale, Sendhil Mullainathan and Margaret McConnell of Harvard, and Jonathan Zinman of Dartmouth—has shown that gentle text-based nagging can induce people to save more.* As part of a study, they worked with banks in the emerging markets of Bolivia, Peru, and the Philippines. When people opened accounts and encouraged to commit to saving certain amounts, the banks randomly assigned some customers to receive reminders via text. Some notes reminded customers that they had focused on a particular goal, others reminded savers that there were incentives for saving (like higher interest rates), and some did both. The conclusion: “Individuals who received monthly reminders saved 6 percent more than individuals who did not. They were also 3 percent more likely to reach their savings goals by the end of the savings program.” The most effective form of messaging was one that reminded people both that they needed to save in order to reach a personal goal and that there were incentives for doing so. Such nudges boosted savings by nearly 16 percent.

A Financial Times article reported that pharmaceutical giant Novartis is partnering with Proteus Biomedical, a medical technology firm. The big idea: implant receivers in people’s shoulders and then embed chips into pills, which, after ingested, send out reminders via text message to take the next one. “Joe Jimenez, head of pharmaceuticals at Novartis, said tests using the system—which broadcasts from the ‘chip in the pill’ to a receiver on the shoulder—on 20 patients using Diovan, a drug to lower blood pressure, had boosted ‘compliance’ with prescriptions from 30 per cent to 80 per cent after six months.” Plenty of companies are developing similar applications, such as MedPrompt and iReminder, which delivers “dosing reminders” by phone, text, or e-mail.

I found the concept interesting and did some digging. Text messages can also help treat schizophrenia:

Objective: To evaluate the efficacy of short message service (SMS) text messages as a compensatory aid to improve independence in individuals diagnosed with schizophrenia and cognitive deficits. Design: An ABA withdrawal single-case experimental design was used. Eight men diagnosed with schizophrenia took part in the study; all demonstrated memory or planning problems in everyday life. Results: Five participants completed the entire trial. Four were more successful in carrying out daily activities when receiving prompts, whereas 1 did not profit from the intervention. Conclusion: SMS text messages can be effective in compensating for cognitive impairment in some but not all individuals with schizophrenia.

A British research study shows that automated text messages are effective in helping some smokers quit. The trial randomly assigned 5,800 smokers who said they wanted to quit to either receive motivational quit-smoking text messages, or to receive placebo text messages. About twice as many smokers who received the quit-smoking messages successfully quit after 6 months. The study was published online June 30 in the British medical journal, The Lancet.

And why does this work? Because nagging works.