Should “carpe diem” be our motto? 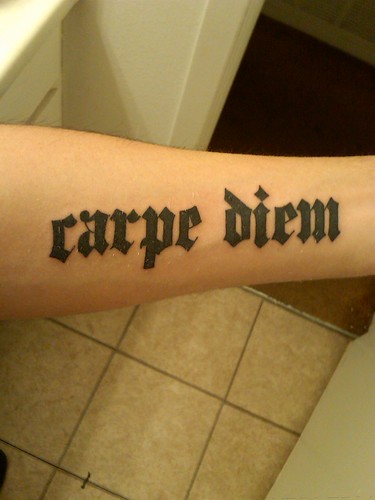 You will not have more time next week, and, as a very interesting New York Times piece explains, we never seem to remember that fact:

There is never enough time or money; this much we all know. Yet a new study finds that when people estimate how much of each they will have in the future, they are consistently more likely to overestimate their time than their dollars.

Dr. Gal Zauberman of the University of North Carolina and Dr. John Lynch of Duke, professors of marketing, have found that future expenditures of time are always psychologically discounted – that is, a future disbursement of time seems to be worth less than an outlay of time in the present.

This makes it easier for people to volunteer for time-consuming tasks if they are told they do not have to do it right away. Even though they know, rationally, that an hour today is just as long as an hour a month from today, and even though there is no reason to believe that they will have any more spare time next month, time discounting makes taking on the new task easier.

And when, as inevitably happens, that future day turns out to be just as busy as today, people seem to learn little from the experience.

This psychological quirk seems to guarantee that people will always be pressed for time, willing to take on tasks not because they regard them as valuable, but just because the promised execution is far enough in the future.

“The danger,” Dr. Zauberman said, “is that this tendency can lead us to volunteer for trivial tasks, and then not have time to do the things that are really important to us.”

A different New York Times article elaborates on why this can be a real problem — we may procrastinate pleasure and end unhappier:

The people who received the long-term certificates were more confident than the others that they would redeem the gifts — a logical enough assumption, given all the extra time they had. But they just kept putting it off, and ultimately they were more likely to let the gift go unredeemed than the people who had received the short-term certificates.

Once you start procrastinating pleasure, it can become a self-perpetuating process if you fixate on some imagined nirvana. The longer you wait to open that prize bottle of wine, the more special the occasion has to be.

If you’re determined to get the absolute maximum out of those frequent flier miles, you can end up wasting them, as Dr. Shu found in an experiment offering people a chance to use discount coupons in the course of buying a series of plane tickets. Once the subjects were told that they might have a chance at a free flight worth $1,000, they scorned lesser awards and hung on to their coupons so long that in the end they had to use them for much cheaper flights.

So what do we do about it? Don’t delay! Eat dessert now!:

One immediate strategy, Dr. Shu said, is to cash in quickly any gift certificate you received this holiday season. “The biggest danger is that it will be forgotten and expire,” she said. “One of the best presents you can give back to the giver is to use it quickly and then tell them how much you enjoyed it. The regret from not using it will be bigger than the regret from using it on a nonperfect occasion, for you and especially for the person who gave it.”

Another tactic is to give yourself deadlines. Cash in the miles by summer, even if you can’t get a round-the-world trip out of them. Instead of waiting for a special occasion to indulge yourself, create one.

Join over 135,000 readers and get my free weekly email update here.