Can you use a good imagination to reduce your appetite? 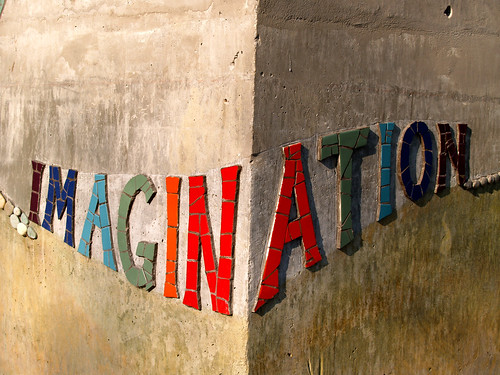 The consumption of a food typically leads to a decrease in its subsequent intake through habituation—a decrease in one’s responsiveness to the food and motivation to obtain it. We demonstrated that habituation to a food item can occur even when its consumption is merely imagined. Five experiments showed that people who repeatedly imagined eating a food (such as cheese) many times subsequently consumed less of the imagined food than did people who repeatedly imagined eating that food fewer times, imagined eating a different food (such as candy), or did not imagine eating a food. They did so because they desired to eat it less, not because they considered it less palatable. These results suggest that mental representation alone can engender habituation to a stimulus.

Studies have shown time and time again that the brain isn’t very good at distinguishing what you imagine from what you actually experience. This can be a good thing — otherwise movies wouldn’t be nearly as exciting.  :)

One takeaway here is that we can use this “error” in how the brain works to improve our lives. For instance, we can use visualization to improve skills:

The aim of this study was to assess objectively the processes of mental rehearsing (imagery) by measuring variations of the autonomic nervous system (or ANS responses) during an open-ended complex motor skill in two actual experiments (volleyball) and during mental rehearsing taking place between them. Comparison between pre- and post-test (volleyball) scores related to imagining and non-imagining performances revealed significant improvement in the former (chi2 = 20.9, P < 0.00001) while in the latter chi2 = 27, P < 0.9, NS. The ANS parameters (skin potential and resistance, skin temperature and heat clearance, instantaneous heart rate and respiratory frequency) were quantified by original techniques and indices. Results from a principal component analysis showed a strong correlation between the responses in actual tasks (pre- and post-test volleyball) and during mental imagery, since the same preferential variables appeared on the main axis in 87% of cases. Thus the same autonomic channels seemed to be used during the actual activity and during the mental imagery of this activity. So far as phasic results were concerned, the main finding was a differing development of skill between imagining and non-imagining volleyball players. No clear difference was seen between pre- and post-tests in non-imaginers, except an increase in the median of the duration of the response observed in heat clearance, m1 and m2 respectively [m1 = 5.8 (SD 4.1) s, m2 = 7.6 (SD 3.9) s, P < 0.001]. Conversely, for other ANS parameters, a significant decrease was seen in the post-test responses compared to pre-test responses in the imagining group [for instance, the median of the duration of the resistance responses decreased from m1 = 12.6 (SD 4.3) s, and m2 = 7.8 (SD 4.5) s, P < 0.0001 in imaginers, while no change was observed in non-imaginers: 9.6 (SD 6.0) s vs 9.5 (SD 6.1) s, NS] except in the duration of the heat clearance response where an increase was seen [m1 = 7.3 (SD 5.0) s vs m2 = 7.6 (SD 3.1) s, NS]. Compared to the non-imagining group, the latter result may also have been associated with a response decrease in the imagining group. Thus mental rehearsing induced a specific pattern of autonomic response: decreased amplitude, shorter duration and negative skin potentials compared to the control group. As this pattern was associated with better performance in the tests it can be suggested that in the case of open-ended motor activity, mental rehearsing may help in the construction of schema which can be reproduced, without thinking, in actual practice. Thus a neural information process might develop in the central nervous system changing from a parallel into a serial treatment.

Want to increase creativity and innovation? Get on a plane.

When to brainstorm and when not to.

Is there a connection between highly visible tattoos and deviant behavior?