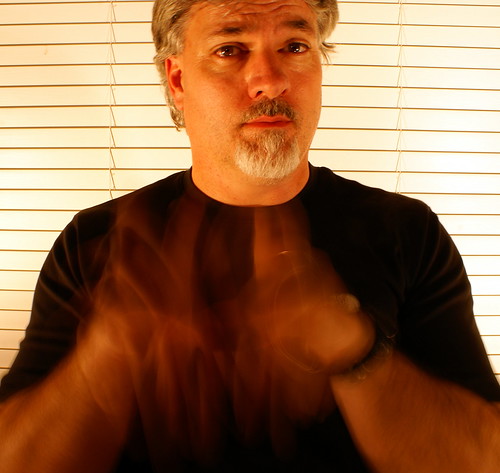 Gesturing when you talk.

It can communicate important information when you’re speaking:

We explored how speakers and listeners use hand gestures as a source of perceptual-motor information during naturalistic communication. After solving the Tower of Hanoi task either with real objects or on a computer, speakers explained the task to listeners. Speakers’ hand gestures, but not their speech, reflected properties of the particular objects and the actions that they had previously used to solve the task. Speakers who solved the problem with real objects used more grasping handshapes and produced more curved trajectories during the explanation. Listeners who observed explanations from speakers who had previously solved the problem with real objects subsequently treated computer objects more like real objects; their mouse trajectories revealed that they lifted the objects in conjunction with moving them sideways, and this behavior was related to the particular gestures that were observed. These findings demonstrate that hand gestures are a reliable source of perceptual-motor information during human communication.

The accuracy of information obtained in forensic interviews is critically important to credibility in the legal system. Research has shown that the way interviewers frame questions influences the accuracy of witnesses’ reports. A separate body of research has shown that speakers gesture spontaneously when they talk and that these gestures can convey information not found anywhere in the speakers’ words. In our study, which joins these two literatures, we interviewed children about an event that they had witnessed. Our results demonstrate that (a) interviewers’ gestures serve as a source of information (and, at times, misinformation) that can lead witnesses to report incorrect details, and (b) the gestures witnesses spontaneously produce during interviews convey substantive information that is often not conveyed anywhere in their speech, and thus would not appear in written transcripts of the proceedings. These findings underscore the need to attend to, and document, gestures produced in investigative interviews, particularly interviews conducted with children.

It can help you with problem solving:

When people talk, they gesture. We show that gesture introduces action information into speakers’ mental representations, which, in turn, affect subsequent performance. In Experiment 1, participants solved the Tower of Hanoi task (TOH1), explained (with gesture) how they solved it, and solved it again (TOH2). For all participants, the smallest disk in TOH1 was the lightest and could be lifted with one hand. For some participants (no-switch group), the disks in TOH2 were identical to those in TOH1. For others (switch group), the disk weights in TOH2 were reversed (so that the smallest disk was the heaviest and could not be lifted with one hand). The more the switch group’s gestures depicted moving the smallest disk one-handed, the worse they performed on TOH2. This was not true for the no-switch group, nor for the switch group in Experiment 2, who skipped the explanation step and did not gesture. Gesturing grounds people’s mental representations in action. When gestures are no longer compatible with the action constraints of a task, problem solving suffers.

Source: “Gesture Changes Thought by Grounding It in Action” from Psychological Science

It can even help you learn a foreign language:

Recent research in psychology and neuroscience has demonstrated that co-speech gestures are semantically integrated with speech during language comprehension and development. The present study explored whether gestures also play a role in language learning in adults. In Experiment 1, we exposed adults to a brief training session presenting novel Japanese verbs with and without hand gestures. Three sets of memory tests (at five minutes, two days and one week) showed that the greatest word learning occurred when gestures conveyed redundant imagistic information to speech. Experiment 2 was a preliminary investigation into possible neural correlates for such learning. We exposed participants to similar training sessions over three days and then measured event-related potentials (ERPs) to words learned with and without co-speech gestures. The main finding was that words learned with gesture produced a larger Late Positive Complex (indexing recollection) in bi-lateral parietal sites than words learned without gesture. However, there was no significant difference between the two conditions for the N400 component (indexing familiarity). The results have implications for pedagogical practices in foreign language instruction and theories of gesture-speech integration.

Source: “Brief training with co-speech gesture lends a hand to word learning in a foreign language” from Language and Cognitive Processes, Volume 24, Issue 2, 2009

I’ve posted before on how gesture can improve learning.