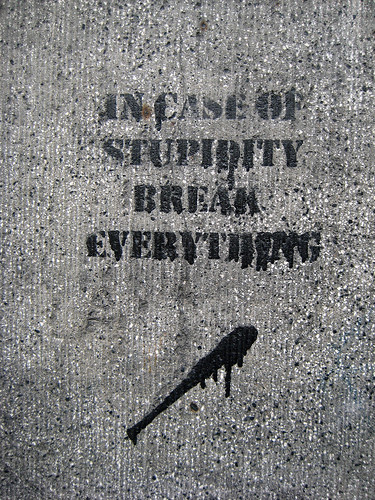 Watching movies and TV shows about stupid people may temporarily make you stupider:

Media priming refers to the residual, often unintended consequences of media use on subsequent perceptions, judgments, and behavior. Previous research showed that the media can prime behavior that is in line with the primed traits or concepts (assimilation). However, assimilation is expected to be less likely and priming may even yield reverse effects (contrast) when recipients have a dissimilarity testing mindset. Based on previous research on narrative comprehension and experience as well as research on media priming, a short-term influence of stories on cognitive performance is predicted. In an experimental study, participants (N = 81) read a story about a stupid soccer hooligan. As expected, participants who read the story without a special processing instruction performed worse in a knowledge test than a control group who read an unrelated text. Participants with a reading goal instruction to find dissimilarities between the self and the main protagonist performed better than participants who read the story without this instruction. The effects of reported self-activation and story length were further considered. Future inquiries with narratives as primes and contrast effects in media effects research are discussed.

Source: “A Story About a Stupid Person Can Make You Act Stupid (or Smart): Behavioral Assimilation (and Contrast) as Narrative Impact” from Media Psychology, Volume 14, Issue 2, 2011, Pages 144 – 167

And to learn how to get smarter fast, click here.