Do poor and hungry men prefer heavier women? Do rich and full guys like skinny girls? 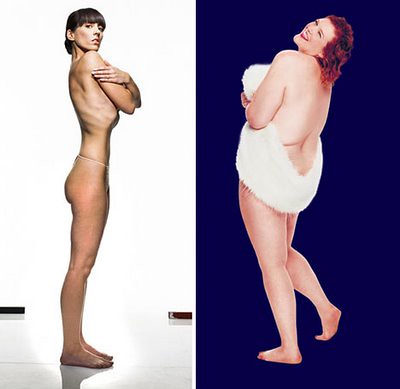 Via On Second Thought: Outsmarting Your Mind’s Hard-Wired Habits:

The new findings are also consistent with cross-cultural studies showing that men’s preference for the curviness of women’s figures varies directly with the men’s economic status. Psychologists Leif Nelson and Evan Morrison demonstrated this intriguing connection in the lab. In one experiment, they recruited a large group of students from campus and asked them how much money they had in their wallets. They figured that those with no cash would be less satisfied, financially, than those with spending money. Then they asked them about their preferences for body weight in a dating partner. When they analyzed all the information, they found that men without money desired women who were significantly heavier than did men with bulging wallets. This was the first laboratory evidence that thinking about one’s financial situation affects dating preferences.

The psychologists decided to take another look at these initial findings in a slightly different way. Instead of asking about ready cash, they asked the volunteers how much money they had socked away in the bank. But they asked some of them to place themselves on a scale of $0 to $500, while others placed themselves on a scale from $0 to $400,000. The idea was to manipulate their sense of relative deprivation: some would feel kind of rich compared to others, while others would feel somewhat deprived. Then they again asked them about their preferences in partners, and again they found that those feeling flush wanted skinnier women. The men with a sense of life’s scarcity wanted their women to carry some extra pounds, almost as if their partner’s fat could protect them against starvation.

What’s the dynamic here? What explains this odd mental link? Nelson and Morrison think it has to do with actual hunger; that is, lack of cash or savings triggers the physiological state we all associate with too little food, and that sense of want triggers a basic need for more calories, more fat. To test this idea, the researchers parked themselves at the door of the Stanford dining hall and handed out questionnaires about dating to diners, some as they entered and others as they left. The idea was that some would be satiated when they thought about dating, while others would have food on their minds. And indeed, the hungry men preferred more full-figured women.

Join over 161,000 readers and get a free weekly update via email here.