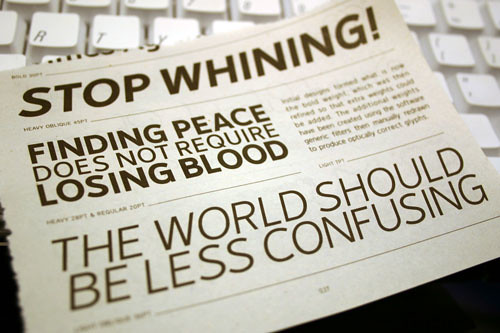 …the researchers conducted a large experiment involving 222 students at a public school in Chesterland, Ohio. One group had all its supplementary study materials, in English, history and science courses, reset in an unusual font, like Monotype Corsiva. The others studied as before. After the lessons were completed, the researchers evaluated the classes’ relevant tests and found that those students who’d been squinting at the stranger typefaces did significantly better than the others in all the classes — particularly in physics.

“The reason that the unusual fonts are effective is that it causes us to think more deeply about the material,” a co-author of the study, Daniel M. Oppenheimer, a psychologist at Princeton, wrote in an e-mail. “But we are capable of thinking deeply without being subjected to unusual fonts. Think of it this way, you can’t skim material in a hard to read font, so putting text in a hard-to-read font will force you to read more carefully.”