Is “tit-for-tat” the best way to deal with people? 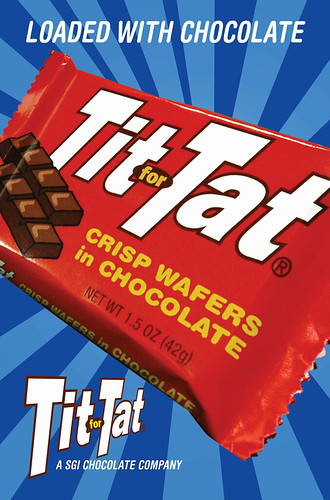 A recent episode of the consistently excellent Radiolab explored the idea, covering the work of Robert Axelrod. Turns out the age old cliche can be an incredibly powerful way to deal with others:

A tit-for-tat strategy plays the iterated prisoners’ dilemma game by cooperating on the first move, and then making the same choice as the other player did on the previous move. This strategy has been shown to be a very robust in that it does well with a wide variety of other strategies, provided that there is a sufficiently large chance that the same players will meet again. The strategy can get started with a small cluster, can spread in a population, and then can resist invasion from strategies that refuse to cooperate (Axelrod, 1984).

The only problem? In real life communication is not always clear and misunderstandings happen. So to avoid a downward spiral, tit-for-tat can be improved by a occasional dash of kindness:

A problem with the tit-for-tat strategy is that it is overly sensitive to misunderstanding or misimplementation. This can be effectively corrected by adding some generosity (occasionally cooperating after the other player defects), or contrition (cooperating after being punished for an unintended defection) (Wu and Axelrod, 1995).

If this is such a great strategy why isn’t it used more? Actually, it is:

Strategies based on reciprocity, such as tit-for-tat strategies, are widely used by nations, bats, birds and monkeys (see Axelrod and Dion, 1988). Ongoing research programs in economics, political science, computer science, evolutionary biology, and other disciplines seek to understand the long term evolution of strategies in populations under various conditions of interaction, limited rationality and adaptation.