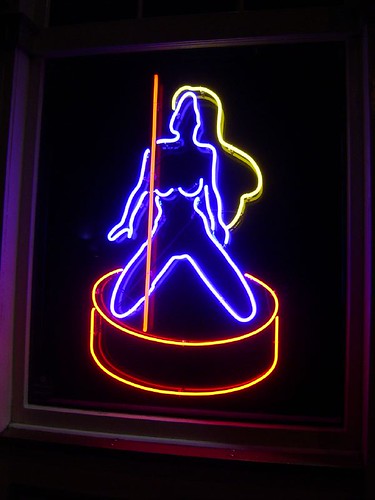 Interestingly strip club patrons tend to be more educated than one would first think. In fact education plays the largest role, with a college degree and an advanced degree increasing the predicted probability of attendance over the reference group by 0.174 and 0.229 respectively.

The same study has a few other interesting tidbits on strip clubs:

According to a 1997 article in U.S. News and World Report by Eric Schlosser, “American’s now spend more money at strip clubs than at Broadway, off-Broadway, regional, and nonprofit theaters; at the opera, the ballet and jazz and classical performances-combined.” A more recent report by the Free Speech Coalition (2005), and recent testimony in front of the Ohio state legislature by an industry advocate, Angelina Spencer, put the total revenues earned by strip clubs at 15 billion dollars a year (Smyth, 2005; Thompson, et. al., 2003). Club revenues generally stem from admission fees, selling food and beverages, and stage fees collected from the dancers. Dancers in turn earn their wages through tips, often collected after dancing on stage or for performing lap or table dances.

Estimates from the National Health and Social Life Survey (1992) suggest 17 million Americans went to a club that featured nude or semi-nude dancers in 1991. Conservatively their attendance represents nearly 67 million visits, 10 million more than the attendance at major league baseball games that year.

Not surprisingly table 1 demonstrates there are significant differences between the genders in their attendance at strip clubs with 20.68% of males and 4.22% of females reporting that they have been to a club in the last 12 months.

Hat tip: Marina Adshade
Books on sex that I recommend are here and here.
You should follow me on Facebook here. I’ve started posting extra content on that page. Don’t miss out; go here and hit the “Like” button.

Are sales of sex toys a good economic indicator?

Does the type of pornography a man looks at affect his fertility?