Where should you sit during a meeting to be most influential? 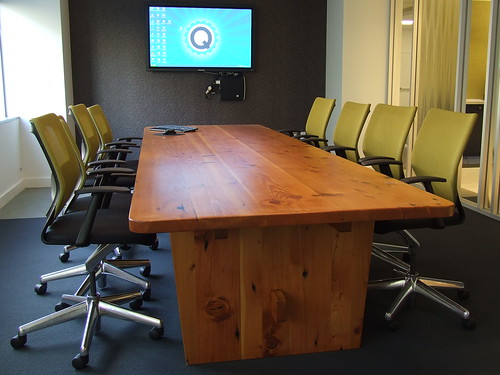 Sit in the middle:

This paper examines centrality of physical position as a cue that leads to systematic biases in people’s decisions to retain or eliminate a participant from a group. Termed the “centre- stage” effect, we argue that people use their belief that “important people sit in the middle” as a schematic cue that they substitute for individuating performance information for individuals who occupy central positions when the goal is to eliminate all but one of the group members. This leads to the errors of those in centre-positions being over-looked: or making them the “centers of inattention.” Study 1 examines people’s lay beliefs regarding positions using two stylized placement tasks (a group interview and classroom seating scenarios). These suggest that people believe that more attention is paid to those in the centre than those on the extremes. Study 2 tests the centre-stage effect using observational data from a real television show, The Weakest Link. Results show that players assigned at random to central positions are more likely to win the game than those in extreme positions. Study 3, a laboratory experiment manipulating attention paid to the game shows that observers over-look the errors of players in the centre to a greater extent than the errors of players in extreme positions. Study 4 replicates the game in the laboratory with direct process measures to show that players playing the game make the same error. Study 5 shows that in a stylized group interview setting, participants who believe that “important people sit in the middle” find the performance of candidates in the extreme position easier to recall than the performance of those in the central position, and are more likely to choose them. Study 6 shows that the “centre-stage” effects are weaker when the end-game rule allows for two (versus one) contestants to be retained. Overall results converge to show that the use of the “centre-stage” heuristic substitutes for the effortful processing of individuating information, leading to a biased (favorable) assessment of people in the centre. Implications for decision-making are discussed.