How to quickly and easily improve your meetings: 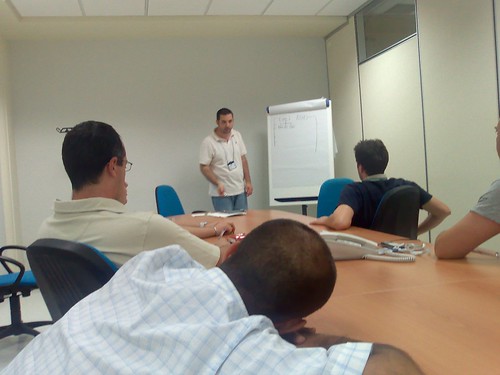 Hold them standing up:

The effects of meeting format (standing or sitting) on meeting length and the quality of group decision making were investigated by comparing meeting outcomes for 56 five-member groups that conducted meetings in a standing format with 55 five-member groups that conducted meetings in a seated format. Sit-down meetings were 34% longer than stand-up meetings, but they produced no better decisions than stand-up meetings. Significant differences were also obtained for satisfaction with the meeting and task information use during the meeting but not for synergy or commitment to the group’s decision. The findings were generally congruent with meeting-management recommendations in the time-management literature, although the lack of a significant difference for decision quality was contrary to theoretical expectations. This contrary finding may have been due to differences between the temporal context in which this study was conducted and those in which other time constraint research has been conducted, thereby revealing a potentially important contingency—temporal context.