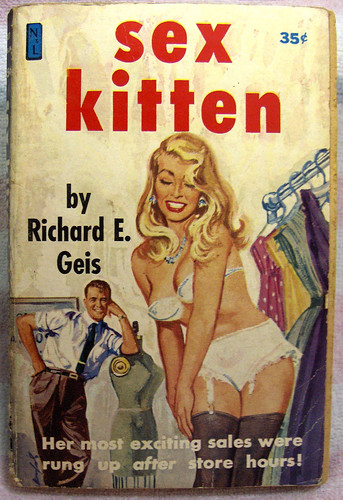 This paper studies the empirical patterns in money, sex and happiness. Using 1990s data from the General Social Surveys of the United States, the paper shows that sexual activity enters strongly positively in happiness equations. We calculate that the median American has sexual intercourse 2-3 times a month. In our data, close to half of American women over the age of 40 report that they did not have sex in the previous year; the figure for men is 20%. Among Americans under 40 years of age, approximately 80% of women and 70% of men had no more than one sexual partner in the previous year. Sex appears to have stronger effects on the happiness of highly educated people than those with low levels of education. The happiness- maximizing number of sexual partners in the previous year is 1. Homosexuality has no statistically significant effect on happiness, but a strong positive effect on the reported amount of sexual activity. Married people have more sex than those who are single, divorced, widowed, or separated. Money buys more sexual partners but not more sex.

Source: “Money, Sex and Happiness: An Empirical Study” from Scandinavian Journal of Economics, 2004

Other interesting bits from the study:

Second, a small proportion of people report homosexual activity. Among males, 3% say they had a male sexual partner in the previous year. Among females, just under 2% report having had a female partner. About 0.5% of females and 0.5% of males report themselves as bisexual.

Third, among those aged under 40 years old, the median individual has sex once a week. This is true both for men and women. About 10% of under-40 Americans say they have sexual intercourse at least 4 times a week. Approximately the same proportion say they are celibate. In the over-40 category, among women the median amount of sex is once a month, while for males it is 2-3 times a month. We cannot tell whether this discrepancy is because males, relatively, have exaggerated memories, or have younger sexual partners, or visit female prostitutes. Among Americans over 40, 13% of women and 20% of men say they have sexual intercourse twice or more times a week.

Fourth, a few men report large numbers of sexual partners (4 males in our sample of approximately 7000 said they had more than 100 partners in the previous year, whereas no women said that, and only 4 women out of 9000 reported having more than 20 partners in the year). Taking the data set as a whole, almost the only way to make the men’s and women’s answers consistent is for there to be some women in the United States who have enormous numbers of sexual partners without reporting that fact in our survey data. It is possible that this is because of the existence of prostitutes. An alternative, and perhaps more likely, explanation is that men overestimate.

The more sex, the happier the person. In column 1, there is almost complete monotonicity in the way the frequency of sexual intercourse enters the equation. Three of the frequency variables are statistically significant at conventional levels. However, celibacy and small amounts of sex have statistically indistinguishable effects upon happiness. There is some evidence that men enjoy sex more than women (compare the variable ‘sex 2-3 times a month in columns 2 and 3 of Table 1), but the broad structure of the equations is the same for both males and females. Dividing the sample into different age groups — columns 4 and 5 in Table 1 — does not change the basic pattern of the results. Interestingly, education does appear to make some difference. In column 6 of Table 1, among those people with less than 12 years of education the only statistically significant sex variable is ‘greater than or equal to four times a week’. In so far as education is a good proxy for income, this implies that sex may bring more happiness to the rich than the poor.

How many sexual partners in the last year maximizes happiness (though cause and effect is difficult to establish in these cross-section data)? The answer according to the data is mundane. The answer is one sexual partner. After some experimentation, we report this simply as the variable ‘single partner’ in Table 1.

Table 2 looks in detail at the type of sexual partner. We find that men who paid for sex are considerably less happy than other people. Those who have ever had sex outside their marriage also report markedly lower happiness scores. In Table 2, columns 3 and 4 show that homosexual activity has no statistically significant effect in a happiness equation.

For completeness, Tables 3 and 4 estimate equations in which sexual activity is the dependent variable. Table 3 is a frequency-of-sex regression. From column 1, we find that men report more sex, with a coefficient of 0.343 and a t-statistic that exceeds 10. Unless this is due entirely to the existence of prostitutes, or to the greater prevalence of male homosexuality than female homosexuality, it is not easy to see how this can be a genuine effect (as sex has to be with a woman). There is no statistically significant effect from years of education. Aging, however, reduces sexual activity. Blacks report more sex than do whites. Married people have (much) more sex than people with other kinds of marital status. Students have less sex than average. People who say their parents were divorced at 16 have more sex than average. In column 2 of Table 3, homosexuals and bisexuals have more sex. Columns 3 and 4 of Table 3 split the data by gender. The structure of the equations is similar for men and women, but unemployment enters positively and significantly in the female frequency-of-sex equation.

What is the connection between income and the frequency of sex? Interestingly, columns 5 and 6 of Table 3 find that it is zero for both men and women. Income buys greater happiness, but it does not buy more sex. Education continues to have no statistically significant effect in the later columns of Table 3.

Finally, Table 4 estimates number-of-sexual-partners equations. There is a positive male dummy variable and a strong negative effect from aging. The number of years of education has no effect. The black dummy variable is again positive. Separated people report higher numbers of sexual partners than others (though this is only for men, as columns 3 and 4 show). Unemployed people tend to have a greater number of sexual partners. The dummy variable for being a student is statistically insignificant. Those whose own parents divorced have more sexual partners. Homosexual and bisexual men and women have far more partners than average. There is a strong difference between divorced men and women. Divorced men have many more sex partners than married and single men, ceteris paribus. Divorced women have fewer partners than married and single women, ceteris paribus.

What is the connection between income and the number of sexual partners that a person has? Table 4 shows that it is positive. Money buys more sexual partners (although the effect is only statistically significant among males, with a t-statistic of 2.61 in column 5 of Table 4).

What are the best predictors of how sexual a woman is?