If you pig out at Thanksgiving are you less likely to impulse buy on Black Friday? 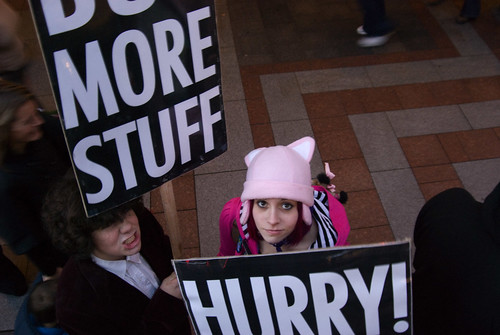 …research from two University of Utah marketing professors suggests how eating a traditional Thanksgiving dinner with turkey and mashed potatoes makes consumers less likely to buy on impulse, which might affect the outcome of their shopping on Black Friday, historically one of the busiest retail shopping days of the year…

…”We found that participants who had consumed a traditional Thanksgiving dinner with turkey displayed less willingness to buy deeply discounted products compared to those who did not consume a traditional dinner,” Himanshu Mishra said.

The combination of tryptophan-rich foods like turkey and carbohydrates like mashed potatoes increases levels of serotonin, a chemical produced in the brain that affects many functions in the central nervous system, including mood, appetite, sleep and some cognition. Serotonin levels have also been shown to correlate with impulsive behaviors. The researchers conclude people who have increased levels of serotonin, such as someone who recently ate a large turkey dinner, are less prone to impulsive purchases. Most meats (e.g., turkey, chicken) and tofu have the amino-acid tryptophan that synthesizes serotonin.

Protein shakes, which also have high levels of serotonin, were also found to reduce consumers’ impulses. “Given that people consume several types of protein drinks for breakfast, they should be made aware that such drinks can reduce their impulsive responding,” Himanshu Mishra said.

The authors suggest that if consumers are made aware that serotonin from specific foods can reduce impulsive product choice and responding, they could use this information to modify their behavior.

Dan Ariely on the behavioral economics of Thanksgiving