Who should you hire? 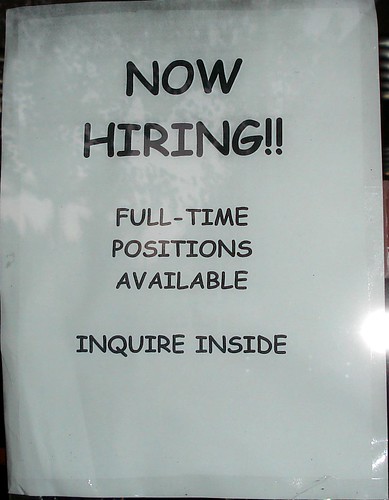 I’ve posted earlier on how to get a job. But what about for employers? Oddly enough, right now can be a hard time to be hiring. Why? You’re flooded with applicants. Normally it’s pretty easy to sort the rockstars from the losers. With double digit unemployment there’s a lot of noise.

So what do we know about hiring the right people and avoiding the wrong ones?

1) First and foremost, here’s Bob Sutton’s excellent post summarizing a study of 85 years of research into what to look for when selecting talent.

2) Find creative ways to recruit and have a great job description.

3) Here’s a tip from the WSJ that unemployed people will not want to hear: hire people who already have jobs. In an economy like this, it’s a sign of quality. (In fact, it’s a method women have historically used when evaluating men.)

4) Always look for education. This seems obvious but education has benefits in non-obvious areas.

This study looks at the effects of education level on job performance in 2 ways. First, it provides a meta-analysis on the relationships between education level and 9 dimensions of job behaviors representing task, citizenship, and counterproductive performance. Results here show that, in addition to positively influencing core task performance, education level is also positively related to creativity and citizenship behaviors and negatively related to on-the-job substance use and absenteeism. Second, we investigate the moderating effects of sample and research design characteristics on the relationships between education and job performance. Significant results were found for gender, race, job level, and job complexity. The article concludes with implications for future research and the management of an increasingly educated workforce.

Source: HOW BROADLY DOES EDUCATION CONTRIBUTE TO JOB PERFORMANCE? from Personnel Psychology

So even if you’re hiring someone for a role where education isn’t required, if all other things are equal, go for the applicant with the degree.

5) Beware of bias (conscious or not) among your hiring managers. And even your recruiters can skew results because of their personal interests:

In this paper we examine the potential existence of a similar-to-me effect in terms of skills between recruiters and applicants. Using evidence from entry exams to the Spanish Judiciary, where applicants are randomly assigned across evaluation committees, we find that committee members tend to be more demanding at those stages where they are more knowledgeable. As a result, applicants who excel in the same dimensions as recruiters are more likely to be hired.

6) I usually think people trust their gut FAR TOO MUCH when it comes to interviewing but there are areas where it’s useful. Putting the bias issue aside, there are some things you can often tell about someone just from looking at them. For instance, if you’re a clothing retailer hiring attractive help can be a bad idea, however criminals are more likely to be ugly.

7) If you’re hiring someone to be a supervisor, get an understanding of whether they think personal qualities are malleable or fixed:

Effective managers recognize both positive and negative changes in employee performance and take appropriate remedial action when required. Managers’ assumptions about the rigidity or malleability of personal attributes (e.g., ability and personality) affect their performance of these critical personnel management tasks. To the extent that managers assume that personal attributes are fixed traits that are largely stable over time, they tend to inadequately recognize actual changes in employee performance and are disinclined to coach employees regarding how to improve their performance. However, a growth-mindset intervention can lead managers to relinquish their fixed mindset and subsequently provide more accurate performance appraisals and helpful employee coaching. Implications for performance evaluation procedures and avenues for future research are outlined.

8) Being able to detect lies in an interview can be helpful. Evaluate the person’s reputation. Recommendations are useful, but don’t let the applicant pick who you talk to:

In most studies using informant reports of personality, the informants are recruited by the targets. Such informants may tend to like the targets and thus portray them in specific ways (e.g., too positively). Study 1 (N = 403) demonstrated the necessity to distinguish between “liking” and “knowing” in studying the relationships between informants and targets. Informants who liked their targets better described them more positively (i.e., as being more extraverted, agreeable, open, conscientious, and less neurotic). The association between personality ratings and liking was moderated by item evaluativeness. Liked targets were also described as being more similar to each other (range restriction), which would lower correlations of informant ratings of personality with external variables. Study 2 (N = 90) used a within-subjects design to disentangle actual personality differences between targets (substance) from the informants’ specific views on the targets (style). Ninety informants were asked to nominate targets they did not like. These targets then nominated informants of their own choice. Target-nominated informants liked the targets very much and described the targets’ personalities very positively and in ways that were highly redundant with the average target’s self-rating. There was evidence that lower liking may be associated with better accuracy. Higher subjective levels of knowing were not associated with better interrater agreement but with a greater willingness to describe targets negatively. Implications for the field of recruiting are discussed. Where possible, the choice of informants and referees should be made independent of the targets’ preferences.

Source: “The letter of recommendation effect in informant ratings of personality” from “Journal of Personality and Social Psychology”

9) How do you land those great people once you find them? Making an offer quickly helps:

Employers often enjoy some discretion in how quickly they extend job offers following candidate interviews. Applicant reactions research suggests that quicker offers are more likely to be accepted. This paper reports an archival study investigating the effect of offer timing on offer acceptance and employment outcomes with field data (N = 3,012) from 1 large company, including both student (N = 906) and experienced (N = 2,106) candidates. The 2 groups differed markedly in their recruiting processes, but job seekers of both types were more likely to accept earlier offers. Further, we found no differences for either performance ratings or turnover among employees hired after quicker offers and those who accepted later offers. It therefore appears that employers may benefit from accelerating their postinterview job offer processes, improving their acceptance rates, and reducing vacancy times without incurring either performance or turnover penalties.

Source: THE EFFECT OF JOB OFFER TIMING ON OFFER ACCEPTANCE, PERFORMANCE, AND TURNOVER from Personnel Psychology

10) And if you did land yourself a rockstar, you better be ready to negotiate.

A book I recommend for job interview prep is here but I would also recommend employers look at it to get an idea of some good questions and how a professional candidate should answer them.
Hopefully this can help you connect with the right person and offer them their dream job.