Scary dreams? The solution might just be video games: 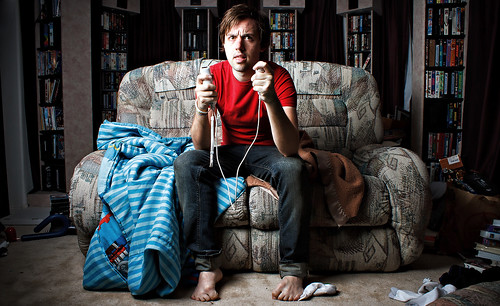 A study shows that because gamers frequently “resolve threats” during game play they would experience fewer “threat severity variables” in their dreams. That’s right: blowing away zombies and defending the USA on your Xbox could mean fewer nightmares:

Revonsuo proposes an evolutionary theory of dreaming in which dreams allow an individual to prepare for real world threats in the safety of the virtual setting of the dream world. Based upon previous work examining the dreams of video game players, it was hypothesized that high-end gamers would experience fewer threat simulation dreams because of frequent threat resolution rehearsal during game play. Subjects were asked to report a night before dream and fill out surveys regarding their gaming history, media use, and dream experiences. Using a factor analysis, support for the main hypothesis was found. Individuals with a history of game play experienced fewer threat severity variables in their dreams.

I know what you’re thinking: Couldn’t all that violent gameplay CAUSE nightmares? Nope:

Often the question arises whether TV viewing or playing computer games, especially those of violent and aggressive content, has negative effects on children’s sleep patterns and dreaming. Empirical data on this topic, however, are scarce. Two hundred fifty-two schoolchildren (range: 9 to 13 years) completed a questionnaire about media use and nightmares. The findings indicates that interindividual differences in nightmare frequency were not explained by interindividual differences in TV viewing or computer game playing habits. In addition, no effect of the TV films the evening before completing the questionnaire on the dreams the subsequent night could be demonstrated. Since the approach could not rule out an effect of media use habits on nightmares, the next step will be a longitudinal study eliciting the media use habits and the occurrence of nightmares by applying self-rated scales as well as information obtained by parents.

Okay, there’s gotta be SOME downside to all that game playing, right? Not really. They can make your dreams more BIZARRE but that might actually be an indication that you’re a creative person:

In a series of studies, J. Gackenbach has been mapping the effects of heavy video game play on consciousness, including dreaming. The reason that gamers are being investigated is that they represent a group of people who are engaging in the most immersive media experience widely available today. With its audio and visual interactive nature as well as the long hours often required to master a game, they are an opportune group to study media effects upon consciousness. In this study, the focus was on dream bizarreness. Dream bizarreness has been variously thought to be the differentiator between waking and dreaming thought, an indication of creativity, and most recently, as a model for solving the binding problem in consciousness. Using A. Revonsuo’s and C. Salmivalli’s scale for dream content analysis, it was found that high-end gamers evidenced more bizarre dreams than did low-end gamers in two of three types of bizarreness categories.

Bizarre and creative? Sounds good to me. In fact, you might even dream of Tetris blocks. It’s quite common.

So go play some games. It’ll increase your reaction time and improve your vision. Your dreams might be more interesting, they might have rotating blocks, they probably won’t be nightmares and they’re less likely to have unresolved conflict in them. (And if you’re on Xbox Live, my gamertag is “bakadesuyo.”)