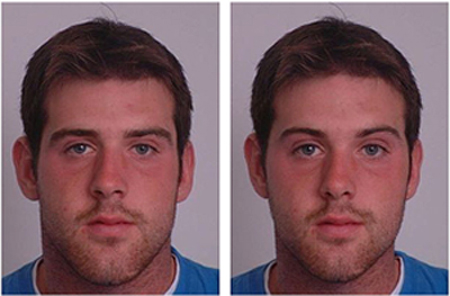 Evolutionary psychologists tell us that one of the reasons why women find masculinity attractive is that high testosterone is a sign of a strong immune system. A strong immune system, in turn, in a sign of good genes and childhood development (testosterone is an immunosuppressant and only men with good genes can overcome its drawbacks). These square-jawed macho men aren’t necessarily good dads: they’re less emotional, often uncooperative, combative, and aggressive. But they may offer good genetic material for your kids, depending on the circumstances.

So how to prove that women equate masculinity with good genes and healthy immune systems (subconsciously, at least)? An indirect approach was taken by Lisa DeBruine and her colleagues at the Face Research Lab at the University of Aberdeen. (The Lab conducts many fascinating studies on attraction, some of which I reference in BLONDES.)

In this new study, DeBruine recruited 345 women of all ages to rate faces. The faces were digitally altered, and ranged from very masculine to very feminine. Participants also completed a test called the Three-Domain Disgust scale, designed to measure moral disgust (deceiving a friend), sexual disgust (hearing strangers have sex), and pathogen disgust (stepping on poop).

Turns out that women’s preference for masculinity in male faces was correlated with disgust sensitivity to pathogens, bu not in the moral and sexual domains. DeBruine speculates that in certain situations, such as disease-ridden environments, women are wired to prefer macho men. The benefits of their good immune system genes are worth the tradeoff.

The testosterone-means-good-genes theory, anyway, may explain why women in disease-ridden environments are likelier to choose macho guys.

Birth control pills may alter the kind of men a woman is attracted to. This study says the more we get to know people the less we like them. Here research shows that women prefer men who are attached. And here we find out whether we can tell a man is dangerous just by looking at him.